Sikhs widely misidentified in US: survey 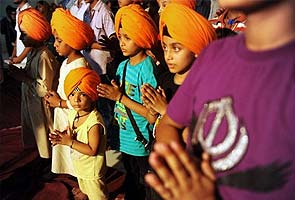 Washington: More than two-thirds of Americans cannot identify Sikhs by their turbans, a survey said on Monday amid a wave of violence against members of the faith.

The study by Stanford University and an advocacy group confirmed widespread fears in the community that many in the United States falsely associated Sikhs with Osama bin Laden or other radical Muslims.

When asked about Sikhs in their religiously mandated turbans, 48 percent of Americans, when offered a choice, said the men were Muslim and 22 percent believed they were Hindu, Buddhist or Shinto, the survey said.

Some 29 percent identified the men as Sikh. Separately, nearly half of Americans incorrectly said that Sikhism was a sect of Islam.

"Most people when presented with the word 'Sikh' don't know much about the culture or the people, but people do have pre-conceived ideas when they're presented by people who wear turbans," said Brooke Salkoff, spokeswoman for the Sikh American Legal Defense and Education Fund that helped lead the study.

The project, conducted with Stanford University's Peace Innovation Lab, aims to find ways to change how the public perceives the turban.

Sikhs are required to wear turbans and maintain beards.

Sikhs in the United States have faced a wave of violence since the September 11, 2001, attacks. In the worst incident, a white supremacist shot dead six Sikhs after barging into their temple in Wisconsin in August 2012.

Promoted
Listen to the latest songs, only on JioSaavn.com
The study assessed some 2,450 responses from three online surveys conducted in late August and early September.