She Wouldn't Take Her Sick Child To Hospital. Cops Knocked Down Her Door

Sarah Beck, a woman Arizona, had allegedly ignored doctors' orders and refused to take her 2-year-old to the emergency room, fearing that she would get in trouble because he wasn't vaccinated. 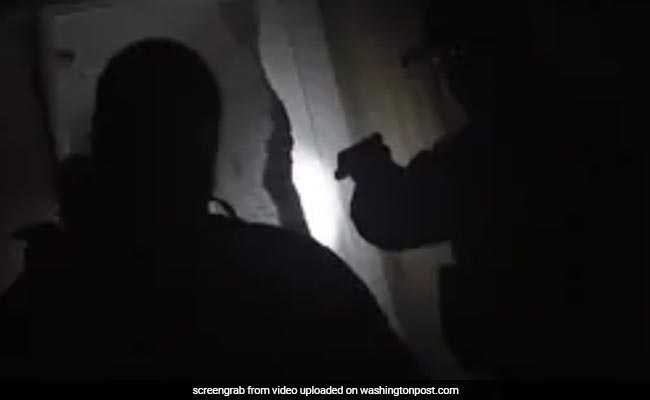 "They treated us like criminals, busting in our door," the child's father said.

The scene looks like something from a middle-of-the-night drug raid. Guns drawn, police officers in tactical vests surround a beige ranch house in an anonymous subdivision. With a single decisive kick, one busts down the door. "Come out with your hands up!" an officer yells, as a flashlight's blinding beams begin sweeping the room.

But police in Chandler, Ariz., weren't seeking out a trove of illegal narcotics when they showed up at the modest home in the Phoenix suburbs on Feb. 25. Instead, they were searching for a 2-year-old who had come down with a dangerously high fever. The boy's mother, Sarah Beck, had allegedly ignored doctors' orders and refused to take him to the emergency room, fearing that she would get in trouble because he wasn't vaccinated. When officials showed up to do a welfare check hours later, the child's father refused to let them in, saying that everything was fine and the fever had passed. Eventually, police decided to take matters into their own hands.

"They treated us like criminals, busting in our door," Brooks Bryce, the toddler's father, told KPNX last month. "I mean, I don't know what kind of trauma that did to my kids."

On Thursday, authorities released body-camera footage from the incident and explained that they decided to "force entry" because the 2-year-old child's health and well-being were in danger, and he needed immediate medical attention. But critics contend that the parents were well within their rights to determine that a costly hospital visit was unnecessary, and that the dramatic late-night raid may have done irreparable damage to their three young children. More than a month later, all three children are still in foster care, according to the Arizona Republic. Bryce and Beck are now fighting to get them back.

"We love our children, we love them," Beck told KPHO. "If our children needed help, we would absolutely help them."

The complicated saga began with a scorching fever. At around 5 p.m. on Feb. 25, Beck brought her son into the Southwest College of Naturopathic Medicine's clinic, police records say. The doctor there recorded the boy's temperature and discovered it was above 105 degrees. After consulting with staff at two area hospitals, the doctor told Beck that since her son was showing possible signs of a life-threatening illness that she was unable to test for at the clinic, the mother should bring the toddler to the emergency room as quickly as possible. (Attorneys said at a court hearing earlier this month that the doctor had feared that the 2-year-old had meningitis, the Republic reported.)

Beck initially refused, the police report says. She told the naturopathic doctor that she feared that the hospital would report her to the Arizona Department of Child Safety for failing to vaccinate her child, and that her husband, who was in favor of vaccination, would be upset by the situation. (In fact, Arizona parents can opt out of vaccinations for personal, religious or medical reasons.) After being assured that she wouldn't get reported to the authorities, she relented. The clinic doctor sent them to a nearby children's hospital, and called the emergency room and asked them to let her know when Beck had showed up.

She never did. Instead, at around 6:30 p.m., Beck called the clinic again and said that she had bought a thermometer on the way home, and that it was showing that her son's temperature had dropped, according to the police report. She later told KPHO that her son has been "acting normal" and "dancing with his sisters in his car seat" after they left the clinic, and that his temperature had fallen to 102. When they got home, it dropped even more, Beck said.

The doctor told Beck that she should still go to the emergency room to make sure that the boy was recovering, the police report says. Beck reportedly said she was nervous, and asked if she could lie about her son being vaccinated. The doctor told her she couldn't, and warned her that she would have to report her to the authorities if she didn't take her son to the hospital or to an urgent care clinic soon.

Hours later, after Beck stopped answering her calls, the doctor called the Arizona Department of Child Safety, saying that she had called numerous hospitals but was unable to locate the family. The agency contacted the Chandler Police Department and asked police officers to perform a welfare check. By then, it was nearly 10:30 p.m.

When officers showed up and started knocking at the door, they could hear children coughing inside. No one answered. Bryce spoke to police on the phone but wouldn't let them in, saying that the 2-year-old's fever had broken and everything was fine, the police report says. He asked them to leave. When they informed him that they were legally obligated to check on the child, Bryce hung up.

After about an hour, DCS obtained a court order allowing them to temporarily take custody of the 2-year-old child for emergency medical treatment. Shortly before midnight, the officers once again asked Bryce to talk to them outside. He reportedly told them that he wasn't going to be forced to take his child to the hospital and wind up with a "three grand" bill. Police gave one more warning, then busted down the door just before 1:30 a.m.

Inside, they found that two additional children, ages 6 and 4. In their report, authorities wrote that the home was a mess, with piles of clothes scattered across the floor. In the parents' bedroom, police found a shotgun next to the bed. Bryce later told KPHO that the gun didn't work.

"We located the other two children in their bedroom which was covered in stains of unknown origin," one officer wrote. "The children advised us they had vomited several times in their beds and had stains around their mouths. One child told me that their 'stomach hurt.'" All three children were taken to the hospital, then placed in foster care. According to the Republic, the 2-year-old was ultimately diagnosed with a respiratory virus. The other children do not appear to have had any serious medical issues.

Nicholas Boca, an attorney who is representing the child's mother in juvenile court proceedings, told The Washington Post that police had been "completely unjustified" in their use of force. "They had their guns drawn and they're busting into a house with three sleeping children," he said. "It's ridiculous."

Both Southwest College of Naturopathic Medicine and the clinic doctor have yet to comment on the incident. Darren DaRonco, a spokesman for Arizona DCS, said in a statement shared with The Post that the agency cannot discuss specific cases due to confidentiality laws, but noted that the state law allows police officers who are assisting child welfare officials to "use reasonable force" to enter buildings.

Though obviously untrue, those rumors do seem to have brought more scrutiny to the case. Arizona State Rep. Kelly Townsend, who earlier this month said that mandatory measles shots were "Communist," told the Republic that it had been brought to her attention "that these parents may have been targeted by the medical community because they hadn't vaccinated their children."

After sitting in on the family's juvenile court hearing this month, Townsend expressed concerns that the children had been permanently traumatized by being separated and placed into foster care after police broke down their door and placed their father in handcuffs. On Facebook, she described the episode as "a complete miscarriage of justice and a shame to the State of Arizona," and called for the children to be returned immediately. Speaking to the Republic, she compared officials' actions to that of the Gestapo.

When contacted by The Post on Thursday night, Townsend was somewhat more restrained, saying she understood the doctor's perspective of better safe than sorry. The situation might have ended differently if the parents had opened their door and talked to police, she acknowledged. Still, Townsend said, she could easily understand the decision to hold off on an expensive trip to the emergency room, given that the child no longer had a high fever. The case raises larger questions about parents' rights to make decisions about their children's care, she added.

"Is the doctor an authority figure that you must listen to, or else risk losing your family?" she asked.