South Korea, US Fail To Reach Cost Sharing Deal For US Troops

South Korean lawmakers have said Washington is seeking up to $5 billion a year to support the troops- more than five times the amount Seoul agreed to pay this year. 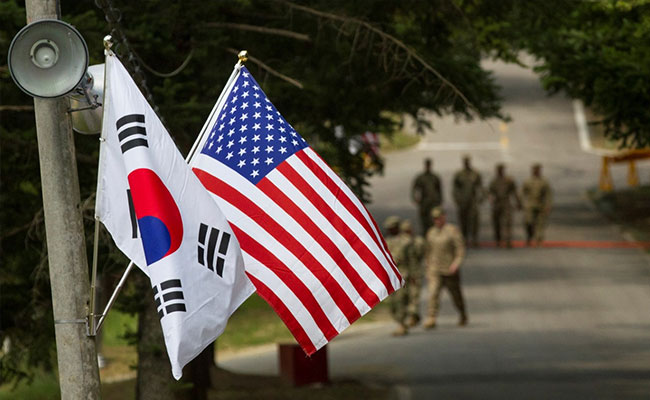 Next set of talks will be in the United States in January, with the exact timing still to be determined.

South Korea and the United States failed on Wednesday to reach an agreement over Seoul's contribution towards hosting some 28,500 US troops, ending two days of talks that were the last before their existing deal expires on December 31.

US President Donald Trump has accused South Korea of being a rich nation that is profiting off the US military forces, which are stationed in the country as a legacy of the 1950-1953 Korean War and continued threats from North Korea.

South Korean lawmakers have said Washington is seeking up to $5 billion a year to support the troops- more than five times the amount Seoul agreed to pay this year.

But the US's chief negotiator James DeHart told reporters after Wednesday's meeting that "($5 billion) is not the number we are currently focusing on in the negotiation," according to Yonhap News Agency.

"We have been coordinating and compromising. But the figure we agree on will be very different from our initial proposal and will also be different from what we are currently hearing from the Korean side," he added.

As part of his "America First" policy, Trump has demanded that many US allies, including NATO members and Japan, pay more towards defence.

The lack of a deal in the talks, led on South Korea's side by chief negotiator Jeong Eun-bo, could result in a repeat of last year when the two countries missed a year-end deadline but reached a retroactive agreement in the new year.

Some experts, both US and Korean, have warned that if no agreement is reached, it could throw the future of the US presence in South Korea into doubt.

The next set of talks will be in the United States in January, with the exact timing still to be determined.

South Korea's Foreign Ministry said their negotiators emphasized the need for "fair, reasonable and mutually acceptable agreements," that will strengthen the alliance.

"The two sides have expanded their understanding of each other through many discussions despite differences in their positions on various issues, and decided to continue close consultations," it said in a statement.

The dispute has been a rare public sign of discord in the alliance that has for 70 years formed a buffer against North Korean aggression. The two Koreas remain technically at war, after the Korean War ended in a truce but not a peace treaty.

There have been several public protests in South Korea against the US calls for more money, and a survey by the Chicago Council of Global Affairs found that only 4% of South Korean respondents said Seoul should meet Trump's demands.

On the other hand, 74% of those questioned said they supported the long-term stationing of American troops in South Korea.

If no deal is reached, the most immediate effect may be on thousands of South Korean civilians who work for the US military and who could be placed on unpaid leave.

(Except for the headline, this story has not been edited by NDTV staff and is published from a syndicated feed.)
Comments
South KoreaUnited StatesSeoul