The 23-year-old said she "mentally will never ever recover from this", posting the photo of her son's clothes covered in human waste. 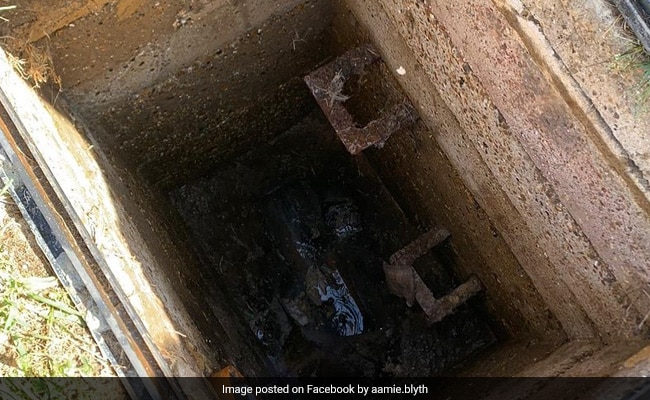 The incident occurred when Amy Blyth was walking with her son on Sunday.

A woman in the United Kingdom jumped into a drain to rescue her 18-month-old son who fell through a manhole cover. The act was captured by a CCTV installed in the area and has gone viral.

The terrifying incident took place on Sunday when Amy Blyth, 23, was walking with her son Theo in Ashford, Kent, according to her Facebook post. The toddler went to investigate a drain cover, and instantly disappeared after plummeting through the cover which closed on top of him.

Ms Blyth, who was right behind the boy, got shock of her life after seeing her son vanish. She tried to grab him, but couldn't and the boy fell into the deep drain.

Without a second thought, Ms Blyth jumped into the drain and pulled out Theo, who was covered in human sewage. She shared the experience on her Facebook page.

“Yesterday was by far the scariest most traumatising day of my life. Never in a million years did I think I would be ripping a drain lid to try and rescue my poor baby, who could have potentially lost his life,” she said in Monday's post.

“Luckily I was able to clench my feet onto the concrete and get my Theo out whilst shit snd piss was pouring on us,” she further said.

The 23-year-old said she “mentally will never ever recover from this”, posting the photo of her son's clothes covered in human waste.

The woman also lashed out at Southern Water, the utility company responsible for the public wastewater collection and treatment in Hampshire, the Isle of Wight, West Sussex, East Sussex and Kent.

“I will not give up until we get answer as to why a drain was left so dangerously. I will fight every day to get what Theo deserves,” she said on Facebook.

Southern Water has apologised to the family, saying that they are “taking the matter very seriously”, according to Daily Mail. The company has launched an investigation to establish who is responsible for the drain and manhole.