Scandal-Hit US Environment Chief Could Be Sacked

The list of accusations levelled against the 50-year-old head of the Environmental Protection Agency (EPA), has grown almost too long to itemize in a single article. 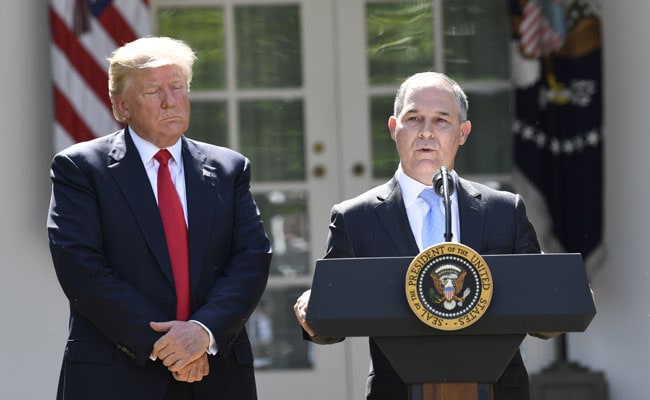 Scott Pruitt has become the focus of multiple investigations in recent months. (AFP)

The list of accusations levelled against the 50-year-old head of the Environmental Protection Agency (EPA), has grown almost too long to itemize in a single article.

Pruitt has become the focus of multiple investigations in recent months, including by his own agency's inspector general, two other independent federal agencies and by Congress itself.

All the charges share a common thread -- that Pruitt, a former Oklahoma attorney general reported to have close ties to fossil fuels industries, appears to have used the position he has held since February 2017 to enrich his own family's lifestyle in violation of federal law and has punished subordinates who raised objections to his behavior, or who failed to show sufficient loyalty to him.

It all began with his penchant for first-class and private air travel while on official business, a bill footed by the taxpayers, in contravention of usual government practice.

Then came the reports of the large number of bodyguards he kept around him 24 hours a day, doubling the cost of his predecessors' security detail.

He also ordered the installation of a secure telephone cabin in his Washington office at the cost of $43,000 (36,000 euros) which critics found excessive.

Then there was the question of his personal expenses. He rented an apartment linked to oil industry lobbyists in a pricey neighborhood of the capital for a mere $50 dollars a night, a sum he only paid for on nights he actually slept there.

He also tasked members of his staff with personal assignments, including finding him another apartment, getting his tickets to sporting events and trying to help his wife find a job.

This week, Kevin Chmielewski, a former EPA deputy chief of staff who was sacked in February, told MSNBC news that he saw Pruitt pay back a young member of staff $600 she had been forced to put on her own credit card for hotel rooms for Pruitt's family during the celebrations for Trump's swearing-in ceremony.

Chmielewski, a Republican and Trump loyalist, also told CNN news that Pruitt allegedly used secret calendars to hide contacts with industry insiders from his own staff.

He was just one of a number of whistle-blowers at the EPA to raise the alarm about Pruitt's behavior to Congress, where many Republicans now appear to be losing their patience with the environment chief.

Until now, the president has stood by his zealous lieutenant, praising his work to roll back Obama-era environmental regulations that Trump says hinder economic growth.

Trump, whose decision to quit the Paris climate accords was vociferously defended by Pruitt, may be changing his mind now though with November's mid-terms looming and Democrats knocking his pledges to "drain the swamp" of Washington graft.

Last month, while praising Pruitt's "fantastic job" at the EPA, the president admitted, "I'm not happy about certain things, I'll be honest."

On Tuesday, White House spokesman Hogan Gidley addressed the mounting ethical questions facing Pruitt and said "these things matter to the president as well, and he's looking into those."

The cooler tone towards Pruitt recalls the changing attitude to other cabinet members who have been dismissed by the president.

In March, Gidley said the president still had confidence in his Veteran Affairs chief David Shulkin "at this point in time." Two days later, he was gone.

And the ouster of former secretary of state Rex Tillerson in January was preceded by a stream of barbed comments and public slights from the president before he finally sacked the former oil industry executive.

Pruitt's fate seemed secure for the rest of Wednesday at least, since it was Independence Day and the president had no scheduled public appearances aside from a picnic in the grounds of the White House.