Saudi Crown Prince Is A Protected Pariah At G20 Summit 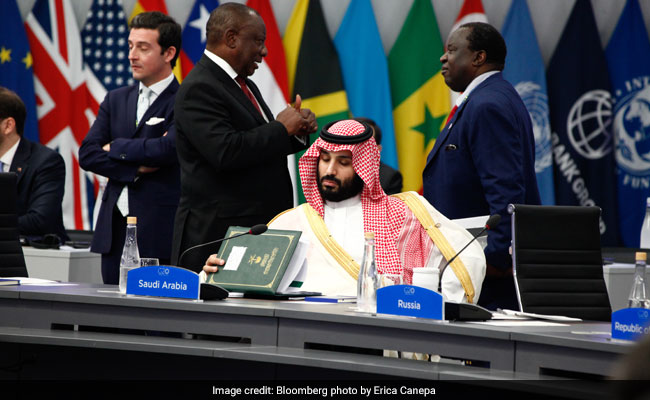 The specter of Jamal Khashoggi hung over the crown prince's Buenos Aires trip since the beginning.

The legions of protesters demonstrating at a leaders summit here have unfurled a sea of standard-issue signs, ranging from "No to Imperialism" to "Yankees Go Home." But a newer rallying cry also appeared on a smattering of homemade posters.

For Saudi Arabia's Crown Prince Mohammed bin Salman - widely known by his initials, MBS - the Group of 20 leaders summit in Buenos Aires has amounted to a key test: his first appearance at a major international event since the killing of dissident journalist Jamal Khashoggi, a Saudi who was a frequent critic of the kingdom's de facto leader.

"The CIA thinks he is the one who ordered the kill on Khashoggi," said Cristian Pirovano, a 40-year old teacher from Buenos Aires, referring to U.S. intelligence assessments that the crown prince almost certainly orchestrated the assassination of Khashoggi, a Washington Post contributing columnist, at his country's consulate in Turkey.

"We don't want him here, because of the assassination of the journalist, because of what the Saudis are doing in Yemen, because of all this death," Pirovano said.

Mohammed came to the summit a pariah to some leaders - he was positioned at the far edge of the back row in the annual "family photo" with attending leaders Saturday, and leaders including Germany's Angela Merkel had let it be known before the summit that they would not see Mohammed in Argentina. The crown prince also holed up in the fortified Saudi Embassy away from the rest of the Saudi delegation after his arrival here, amid moves by Argentine prosecutors to investigate human rights complaints against him.

But Mohammed was also secure in the knowledge that President Donald Trump had already said that the crown prince's culpability, if any, would not rupture the U.S. relationship with Riyadh.

That guarantee helped convince Mohammed that he could make the trip on behalf of his country, which is slated to play host to the same G-20 gathering in 2020. And Mohammed has found comfort in some quarters here - a high-five from a grinning Russian President Vladimir Putin, and a brief but symbolic televised exchange with Trump, his daughter Ivanka Trump and Treasury Secretary Steven Mnuchin. The White House said Trump merely "exchanged pleasantries."

Prime Minister Narendra Modi was also photographed smiling next to Mohammed at their private meeting Friday, and British Prime Minister Theresa May has defended her plans to also meet with the young Saudi.

But the man who once sought to fashion himself as the younger, fresher face of Saudi leadership has also arrived to find himself viewed as tainted, transformed into a global symbol of brutal tyranny. In what was meant to be a triumphant display of his consolidation of power at home, Mohammed has instead been dogged by legal attempts to prosecute him in Argentina for foreign crimes, singled out by protesters and scolded by European leaders.

"His reputation has obviously been seriously damaged," said Jose Miguel Vivanco, executive director of Human Rights Watch Americas Division. "I think he was convinced that he could walk on water and pay no cost whatsoever. But this case will follow him every time he leaves Saudi Arabia, probably for the rest of his life."

Mohammed has not necessarily been persona non grata. In a news conference Thursday, Argentine President Mauricio Macri justified the prince's presence at the summit.

"Saudi Arabia is a member of the G-20 so the prince has to come," said Macri, who went on to meet with Mohammed on Saturday. His role in the killing of Khashoggi, Macri said at the news conference, is a subject that "has impacted the world and that may be discussed in bilateral or general meetings. But he is part this community and is now in the country to participate starting tomorrow."

Yet he has also been taken to task. In a conversation with the crown prince on Friday, France's Emmanuel Macron called for international investigators to join the probe into Khashoggi's killing, and stressed "the necessity of a political solution" to the Saudi-backed war in Yemen.

"The Khashoggi case is serious and I think the truth needs to be sought. I want investigations in Turkey and Saudi Arabia to continue to clarify the situation to the family and the international community," Macron said on Friday.

Also on Friday, an apparently private - and heated - conversation between Macron and Mohammed was captured on microphone. "I do worry. I am worried. I told you," Macron says to him.

"Yes, you told me, thank you very much," the prince says.

"You never listen to me," Macron responds.

Turkey's President Recep Tayyip Erdogan used the G-20 as a platform to slam the Saudis for their contradictory statements and lack of cooperation with Turkish investigators probing the assassination, which took place at the Saudi consulate in Istanbul.

"This is not an issue only for Turkey but for the whole world," he said."Our judicial and administrative bodies have not unfortunately received the required support from Saudi officials," Erdogan told reporters in Buenos Aires on Saturday. "The crown prince has stated that we cannot blame anyone unless the crime is proven. Well, we do know that 15 people have arrived in Istanbul in two separate aircraft and they have acted in a planned operation, as they themselves admitted. But now we see that they have decided to deny this, too."

During her one-on-one with Mohammed, Britain's Prime Minister Theresa May refused to discuss key economic issues, such as bilateral trade. Instead, May, a government spokesman said, raised the Khashoggi assassination, saying Saudi Arabia needed to "take action to build confidence that such a deplorable incident could not happen again," according to the Guardian.

A spokeswoman for the Saudi Arabian delegation declined to comment.

The specter of Khashoggi hung over the crown prince's Buenos Aires trip since the beginning.

The 747 carrying Mohammad and a delegation of 400 Saudis landed in Buenos Aires on Wednesday, with cameras capturing the crown prince descending a staircase, resplendent in flowing robes. Argentina's La Nacion newspaper reported the Saudis had booked rooms for the delegation at the luxurious Four Seasons Hotel in Buenos Aires - but the crown prince's plans appeared to abruptly change.

Human Rights Watch on Monday filed a complaint with Argentine prosecutors, asking them to examine Mohammed's alleged responsibility for the torture of Saudi citizens, atrocities in Yemen and the assassination of Khashoggi. Universal jurisdiction applies in Argentina, allowing crimes committed abroad by any national to be probed here.

By Wednesday - the day the prince landed - a federal prosecutor had begun making inquiries, and forwarded the case to an investigating judge.

Instead of retiring to the Four Seasons, Mohammed - stalked by Argentine TV cameras - stayed at the Saudi Embassy, apparently not leaving until the official start the of the summit on Friday morning.

Argentine officials say his diplomatic immunity, plus the length required for any investigation, have all but ruled out any immediate action against Mohammed during the summit. But his apparent caution suggested concern, and that his future travel plans may be marred by similar legal maneuvers.

"You can be sure other cases will be filed when Mohammed travels," Vivanco said. "Where ever he goes, he will be under scrutiny."

(This story has not been edited by NDTV staff and is auto-generated from a syndicated feed.)
Comments
Mohammed bin SalmanJamal KhashoggiG20 Summit 2018 Argentina