Prince Mohammed's presence at the international summit has been contentious following the killing of Saudi journalist Jamal Khashoggi at a Saudi consulate in Istanbul in October. 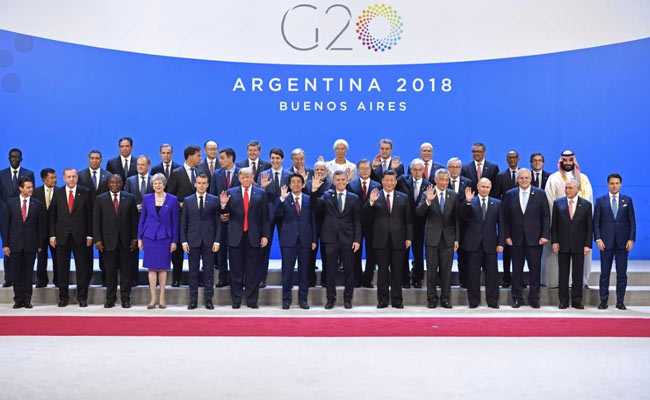 Saudi Arabia's Crown Prince Mohammed bin Salman was sidelined during the official "family photo" of world leaders and other dignitaries at the Group of 20 summit in Buenos Aires on Friday, standing at the far edge of the group portrait and ignored.

Prince Mohammed's presence at the international summit has been contentious following the killing of Saudi journalist Jamal Khashoggi at a Saudi consulate in Istanbul in October.

The crown prince, Saudi Arabia's de facto ruler, quickly exited the stage without shaking hands or talking with other leaders.

Macri has said accusations that Prince Mohammed was involved in Khashoggi's death could be discussed by world leaders during the two-day summit. Saudi Arabia has said the prince had no prior knowledge of the murder.

Russian President Vladimir Putin and Prince Mohammed later exchanged a high-five and a handshake and laughed heartily as they took seats next to each other in the main meeting room.

(Except for the headline, this story has not been edited by NDTV staff and is published from a syndicated feed.)
Comments
Saudi PrinceSaudi prince at G20Saudi crown prince