Trudeau's sunny persona and "progressive" agenda, which propelled him to global rockstar status in an era of populist backlash, have found few takers abroad. 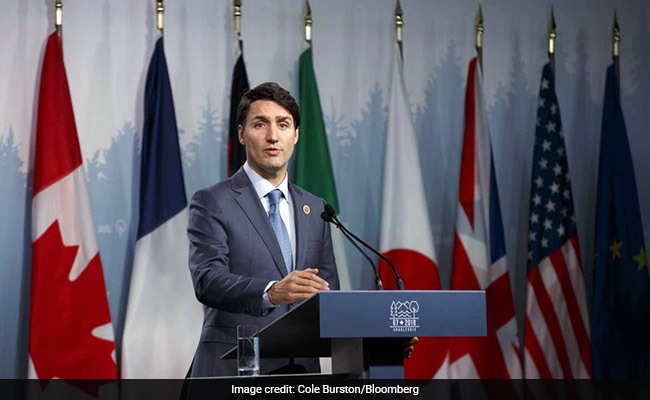 Justin Trudeau's attempts to export his "sunny" progressive ways have hit another roadblock, this time with Saudi Arabia. Yet unlike in recent spats with China and India, Canada's prime minister may get a slight boost at home for his support of women's rights.

"Let me be very clear for everyone here and for Canadians who may be watching and listening: Canada will always stand up for human rights in Canada and around the world," Freeland said in Vancouver Monday. "Women's rights are human rights."

Trudeau's sunny persona and "progressive" agenda, which propelled him to global rockstar status in an era of populist backlash, have found few takers abroad. In his India trip this year, he was dogged by questions of whether his government was too sympathetic toward Sikh separatists. And Trudeau rankled China with a push to adopt provisions on trade like labor, gender and environmental guarantees.

While these global clashes have at times eroded Trudeau's popularity at home, the standoff with Saudi Arabia is unlikely to have much lasting impact. It may even shore up support for his Liberal Party, which is neck and neck in most polls with the opposition Conservatives ahead of 2019 elections. Trudeau's backing this year has stumbled to its lowest level since the Liberals took power in 2015, with gaffes overseas contributing to the decline.

"There's a bigger issue at play, there's the political calculus," pollster Nik Nanos said Monday in an interview, adding that Trudeau may have been compelled to act to assert his human rights views and boost a flagging political image. "Now you have Liberals and Tories in a dead heat and so the Liberals have to look at ways to jump start their support."

Saudi Arabia on Sunday recalled its ambassador to Ottawa and ordered the Canadian envoy to Riyadh to leave within 24 hours, according to a Saudi Foreign Ministry statement. The country's airline also plans to halt flights to Canada starting Aug. 13, according to a government statement. Saudi Airlines flies four times a week to Toronto.

Calling out Saudi Arabia on women's rights fits with Trudeau's push for gender equality. He appointed a gender-balanced Cabinet when he was elected, and set up a women's council with U.S. President Donald Trump to increase access to capital for female business owners during a visit to the White House last year.

"It could be perceived as a win domestically," said Bessma Momani, a professor in the department of political science at the University of Waterloo. "Will the Conservative Party want to die on the sword defending Saudi Arabia? Probably not."

The stance comes with limited economic risk for Trudeau, given that Saudi Arabia is such a small trading partner. So far this year, Canada has exported $1.08 billion (C$1.4 billion) in merchandise goods to Saudi Arabia and imported C$2 billion, according to Statistics Canada data.

"I would expect the Canadian public would be supportive of the position that Canada has taken, calling for greater respects of human rights in Saudi Arabia," said Roland Paris, a University of Ottawa professor and former Trudeau foreign policy adviser. "I don't think that this poses any serious domestic political challenge for the Trudeau government, but it may pose a challenge for specific Canadian exporters."

Saudi investments in Canada include G3 Global Holdings Ltd., a joint venture between Bunge Ltd. and Saudi Agricultural & Livestock Investment Co., which purchased the former Canadian Wheat Board in 2015. Saudi Arabia has invested about $6 billion in Canadian businesses since 2006, data compiled by Bloomberg show.

Tanks, armored vehicles and parts and motor vehicles accounted for about 45 percent of Canada's 2016 exports to the kingdom, while crude oil and copper ores made up about 98 percent of imports, according to a Canadian government report. Saudi Arabia supplies oil to the Irving Oil refinery in Saint John, New Brunswick. Messages seeking comment sent to Irving, Bunge and G3 weren't immediately returned. Markets were closed Monday for a holiday across most of Canada.

SNC-Lavalin Group Inc., Canada's biggest engineering and construction company, is seeing "no immediate impact" to its operations in Saudi Arabia, according to Daniela Pizzuto, a spokeswoman. The Montreal-based firm has been operating in Saudi Arabia for five decades and last month signed a five-year agreement to provide engineering services to a joint venture between Saudi Aramco and Kuwait Gulf Oil Co. SNC is already building various facilities at a gas processing plant operated by Saudi Aramco, the world's biggest exporter of crude.

"We trust that this situation will be resolved at the earliest opportunity," Pizzuto said in an email Monday. "We greatly value the relationships that have been built and our contributions to the Kingdom of Saudi Arabia."

Rex Brynen, a political science professor at McGill University in Montreal, said the spat may hurt Trudeau "slightly" but won't become a major domestic issue other than giving the opposition Conservative Party some political ammunition.

"The Conservatives will say Trudeau talks big and goofs up; this situation will be a drop in the bucket," Brynen said Monday in an interview. "Part of the Conservative strategy is to paint Trudeau as a lightweight who doesn't think of the consequences of his actions."

The Saudi Foreign Ministry cited remarks last week by Freeland and the Canadian embassy in Riyadh criticizing the arrests of women's rights activists including Samar Badawi. Her brother Raif Badawi, a blogger who was critical of the government, was already in a Saudi jail. Raif Badawi's wife is a Canadian citizen.

"The Canadian government was only voicing a frustration that other Saudi allies privately feel with the Kingdom's reform process, but was unwise to do it in comparatively strident language," said Neil Partrick, a Saudi expert and editor of "Saudi Arabian Foreign Policy: Conflict & Cooperation." Because the Trudeau government isn't a significant ally, the Saudis "probably decided that Canada was, for the time being at least, expendable," he said.