For many foreigners, Prince Alwaleed - whose net worth has been estimated by Forbes magazine at $17 billion - is the face of Saudi business, appearing frequently on international television and in articles about his investments and lifestyle. 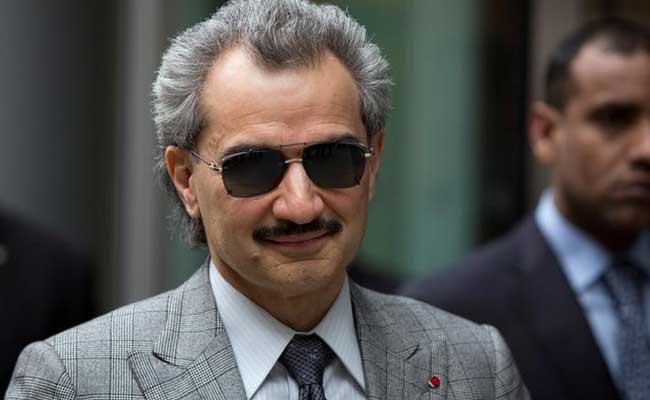 The release of Saudi Arabia's Prince Alwaleed bin Talal, known for his big bets on Citigroup and other top Western companies, is likely to reassure investors in his sprawling international business empire.

For many foreigners, Prince Alwaleed - whose net worth has been estimated by Forbes magazine at $17 billion - is the face of Saudi business, appearing frequently on international television and in articles about his investments and lifestyle.

A 2013 Forbes magazine profile described his marble-filled, 420-room Riyadh palace, a private Boeing 747 equipped with a throne, and his 120-acre resort on the edge of the Saudi capital with five homes, five artificial lakes and a mini-Grand Canyon.

Directly and indirectly through his investment firm Kingdom Holding, he holds a portfolio of stakes in companies such as Twitter, where he is believed to own nearly 5 percent, ride-hailing firm Lyft and French hotel operator Accor, where latest disclosures show him with 5.7 percent.

His web of hospitality and real estate investments includes the George V hotel in Paris, New York's Plaza hotel and the Savoy hotel in London. Investments within Saudi Arabia include a 16.2 percent stake in lender Banque Saudi Fransi.

The assets of Prince Alwaleed, who is in his early 60s, appeared at risk of seizure or liquidation when he was detained in November in a crackdown on corruption. A Saudi official said he was accused of money laundering, bribery and extortion.

Kingdom Holding's share price plunged as much as 23 percent in following days, wiping about $2.2 billion off his fortune.

But the stock has since recovered about half its losses. The prince's release on Saturday could help it rebound further.

Terms of the release have not so far been disclosed. A senior Saudi official told Reuters the prince was freed after a financial settlement over "violations" to which he had admitted. But the official gave no details beyond saying Prince Alwaleed would continue to head Kingdom Holding.

Prince Alwaleed told Reuters in the final hours of his captivity that he maintained his innocence of any wrongdoing, and did not expect to have to hand over assets to the state.

The prince also said he was able to communicate with executives at his business during his detention, and that Kingdom Holding would remain under his ownership.

Prince Alwaleed, whose father was the Saudi finance minister in the 1960s, formed Kingdom Holding in 1979, initially pouring money into real estate in Riyadh. In the 1990s, he ventured into Wall Street, investing heavily in Citigroup.

He had a close relationship with former Citigroup Chief Executive Sanford "Sandy" Weill, and has nurtured close ties with other Wall Street leaders including Goldman Sachs chief executive Lloyd Blankfein.

"He's always been a colourful and unofficial public face of Saudi Arabia, though he has never been a key decision-maker in the kingdom," a Gulf-based businessman said.

Well before he was detained, Prince Alwaleed publicly endorsed economic and social reforms pushed by Crown Prince Mohammed bin Salman, who launched the crackdown on corruption.

Prince Alwaleed was an early advocate of women's employment in Saudi Arabia and ending a ban on women driving. In September, King Salman ordered the driving ban to be lifted this year.

The prince has also been outspoken in the international arena. During the U.S. election campaign, he called Donald Trump a "disgrace" and said he should withdraw from the campaign after Trump pledged to ban Muslims' entry into the United States.

Trump responded by tweeting that the Saudi prince wanted to control "our politicians with daddy's money. Can't do it after I get elected."

Following the vote, Prince Alwaleed congratulated Trump on his victory and said that, whatever past differences, America had spoken.

(This story has not been edited by NDTV staff and is auto-generated from a syndicated feed.)
Comments
Alwaleed bin TalalSaudi Prince AlwaleedSaudi Prince released