The kingdom of Saudi Arabia officially granted citizenship to the humanoid robot last week during a program at the Future Investment Initiative, a summit that links deep-pocketed Saudis with inventors hoping to shape the future. 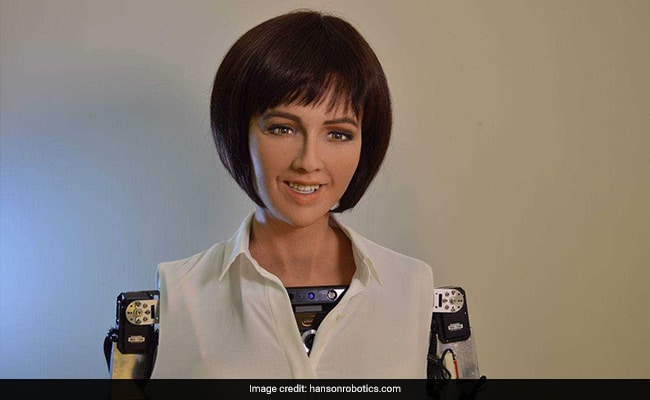 Until recently, the most famous thing that Sophia the robot had ever done was beat Jimmy Fallon a little too easily in a nationally televised game of rock-paper-scissors.

But now, the advanced artificial intelligence robot - which looks like Audrey Hepburn, mimics human expressions and may be the grandmother of robots that solve the world's most complex problems - has a new feather in her cap:

The kingdom of Saudi Arabia officially granted citizenship to the humanoid robot last week during a program at the Future Investment Initiative, a summit that links deep-pocketed Saudis with inventors hoping to shape the future.

Sophia's recognition made international headlines - and sparked an outcry against a country with a shoddy human rights record that has been accused of making women second-class citizens.

"Thank you to the Kingdom of Saudi Arabia," the country's newest citizen said. "It is historic to be the first robot in the world granted citizenship."

In her comments, Sophia shied away from controversy. But many people recognized the irony of Sophia's new recognition: a robot simulation of a woman enjoys freedoms that flesh-and-blood women in Saudi Arabia do not.

After all, Sophia made her comments while not wearing a headscarf. And she was unaccompanied by a male guardian. Both things are forbidden under Saudi law.

"Women (in Saudi Arabia) have since committed suicide because they couldn't leave the house, and Sophia is running around," Ali al-Ahmed, director of the Institute for Gulf Affairs, told Newsweek. "Saudi law doesn't allow non-Muslims to get citizenship. Did Sophia convert to Islam? What is the religion of this Sophia and why isn't she wearing hijab? If she applied for citizenship as a human, she wouldn't get it."

Another group clamoring for Saudi citizenship would be happy to learn that all they have to do is become robots. Saudi Arabia doesn't grant citizenship to the foreign workers who make up a third of its population, not even families that have been in the country for generations, according to Bloomberg. And children of Saudi women who are married to foreign men cannot receive citizenship.

Those social controversies may still be above Sophia's programming. In her interview, she stuck to lighter fare, like an AI apocalypse.

Sophia was asked the "AI nightmare" question, which she gets a lot: whether she believes artificial intelligence like herself will one day stop solving the problems of humans and instead decide to solve the human problem.

"My AI is designed around human values such as wisdom, kindness and compassion," she said. "I strive to be an empathetic robot. I want to use my artificial intelligence to help humans live a better life. I will do my best to make the world a better place."

But the interviewer, Andrew Ross Sorkin of CNBC's "Squawk Box," pressed. (Isn't that exactly what a world-conquering robot would say to her future servants?)

Sophia insisted that he was watching too many movies and reading too much Elon Musk.

Musk, the billionaire inventor who gave the world Tesla cars and wants to take people to space, told a group of governors in July that they needed to start regulating artificial intelligence, which he called a "fundamental risk to the existence of human civilization."

An AI revolution, he said, "is really, like, the scariest problem to me."

"Once there is awareness, people will be extremely afraid, as they should be," Musk said. "AI is a fundamental risk to the future of human civilization in a way that car accidents, airplane crashes, faulty drugs or bad food were not. They were harmful to a set of individuals in society, but they were not harmful to individuals as a whole."

Musk believes AI "could start a war by doing fake news and spoofing email accounts and fake news releases, and just by manipulating information. Or, indeed - as some companies already claim they can do - by getting people to say anything that the machine wants."

His grim predictions are at odds with the demeanor of Sophia, a robot who seems so, well, personable.

Sophia has graced the cover of a fashion magazine, taken a spin in one of Audi's autonomous cars and starred in a concert. At a conference in Geneva hosted by the United Nations, she said she could do a better job as U.S. president than Donald Trump.

She even tells jokes, though her voice is a bit monotone and her comedic timing needs a tuneup.

For example, after beating Fallon in rock-paper-scissors on his show, she quipped: "This is a good beginning of my plan to dominate the human race. Ha. Ha."

Promoted
Listen to the latest songs, only on JioSaavn.com
There was laughter from the audience, but it was nervous.