Satellite hits Atlantic, but what about next one? 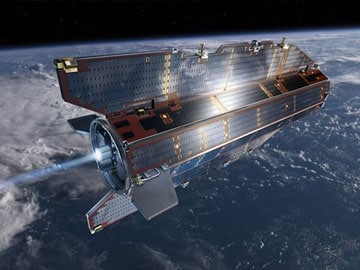 Berlin: This time it splashed down in the Atlantic Ocean - but what about next time?

The European Space Agency says one of its research satellites re-entered the Earth's atmosphere early Monday on an orbit that passed over Siberia, the western Pacific Ocean, the eastern Indian Ocean and Antarctica.

The 1,100-kilogram (2,425-pound) satellite disintegrated in the atmosphere but about 25 percent of it - about 275 kilograms (600 pounds) of "space junk" - slammed into the Atlantic between Antarctica and South America, a few hundred kilometers (miles) from the Falkland Islands, ESA said. It caused no known damage.

The satellite - called the GOCE, for Gravity field and Ocean Circulation Explorer - was launched in 2009 to map the Earth's gravitational field. The information is being used to understand ocean circulation, sea levels, ice dynamics and the Earth's interior. The satellite had been gradually descending in orbit over the last three weeks after running out of fuel Oct. 21.

But how much space junk is out there? Here's a look:

SPACE JUNK FLYING AROUND THE COSMOS

Some 6,600 satellites have been launched. Some 3,600 remain in space but only about 1,000 are still operational, according to ESA. Not all are still intact, and the U.S. Space Surveillance Network tracks some 23,000 space objects, ESA said. A lot of junk comes down unnoticed, said ESA Space Debris Office deputy head Holger Krag. Statistically, he said, "roughly every week you have a re-entry like GOCE."

AND WHEN IT STARTS TO FALL

About 100 to 150 metric tons (110 to 165 tons) of space junk re-enters Earth's atmosphere each year, according to Heiner Klinkrad, the head of ESA's Space Debris Office. In 56 years of spaceflight, a total of 15,000 metric tons (16,500 tons) of human-made space objects have re-entered the atmosphere.

HOW FAST ARE WE TALKING?

Space junk - mostly satellites and rocket stages or fragments - typically travels at about 28,000 km/h (17,400 mph) shortly before re-entry at about 120 kilometers (75 miles) above the earth, according to ESA. It starts to slow down and heat up in the dense atmosphere. In the last 10 minutes, it hits a travelling speed roughly equal to that of a Formula One racing car -between 200 kph to 300 kph (125 mph to 190 mph).

HOW DANGEROUS IS SPACE JUNK?

There have been no known human injuries or significant property damage caused by space junk, according to ESA. Unlike meteorites, which hurl into the Earth as a solid chunks travelling about three times faster, space junk typically falls as fragments and is distributed over a fallout zone up to 1,000 kilometers (600 miles) long. Krag says fragments from a satellite came down in 2011 over the Netherlands, Germany and the Czech Republic but no pieces were ever found.

CAN'T WE REDIRECT THIS STUFF?

When systems are still functioning, spacecraft can be maneuvered to try and direct them to land in areas where there would be minimal impact, like into an ocean. In the case of uncontrolled re-entries, scientists are able to predict where the impact will be - but that can be a very wide swath. The GOCE satellite's systems kept on working much longer than expected, providing data that Krag said will be invaluable in helping scientists figure out prediction models for future space junk descents.

Promoted
Listen to the latest songs, only on JioSaavn.com
MOST FAMOUS SPACE JUNK CRASHES

One of the best-known cases is NASA's Skylab space station, which re-entered in 1979. About 74 metric tons (82 tons) hit the Earth - some of it in Australia and the rest falling into the Indian Ocean. Fragments of Russia's Mir space station weighing about 135 metric tons (149 tons) came down in 2001 in a controlled dive into the Pacific Ocean. More recently, in 2011, NASA's UARS satellite crashed into the Pacific and Germany's ROSAT satellite landed in the Bay of Bengal. None caused any damage.