Saree Made Of Recycled Plastics To Mark Queen's Platinum Jubilee 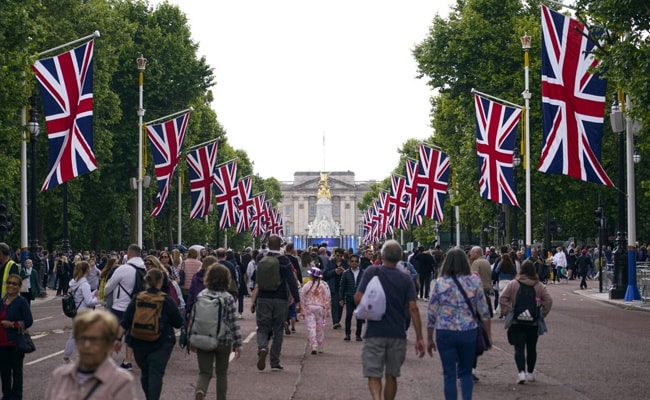 The Queen's Birthday Parade will involve more than 1,500 soldiers and musicians and around 240 horses.

More than 200,000 local events and street parties are expected across all parts of the UK for the mega Platinum Jubilee celebrations of Queen Elizabeth II's 70 years on the British throne.

A series of events have been lined up over the course of the extended Bank Holiday weekend between Thursday and Sunday, which will also feature a saree created with sustainable recycled plastics displayed on four-meter-high puppets.

"To re-imagine the saree, a timeless garment, for the Queen's Platinum Jubilee Pageant is both an honour and a joy," said Nutkhut Co-Artistic Director Simmy Gupta, about the saree designed by renowned Irish fashion designer Paul Costelloe and created as a group project by Arts University Bournemouth students.

The Platinum Jubilee Pageant will traverse through The Mall in London and culminate at Buckingham Palace with around 150 highlight performers, including singer Ed Sheeran, paying tribute to the 96-year-old monarch.

A giant dragon puppet the size of a double decker bus, corgis, acrobats, dancers and circus acts are among the elements that will be broadcast via big screens in London, Edinburgh's Princes Street Gardens and in Cardiff's Bute Park for the grand televised pageant.

"With four days of celebrations and millions around the world taking part, this weekend will be a fitting tribute and celebration of her service and dedication to the people of the UK and the Commonwealth," said UK Culture Secretary Nadine Dorries.

Celebrations begin on Thursday with the Queen's Birthday Parade or Trooping the Colour taking place at Horseguards Parade in London. It will be followed by a Service of Thanksgiving at St. Paul's Cathedral on Friday and then a Party at the Palace concert on Saturday night, with some of the biggest names in music performing.

The Queen's Birthday Parade will involve more than 1,500 soldiers and musicians and around 240 horses, with the royal family assembling on the balcony of Buckingham Palace before beacons are lit in the evening.

Friday's service will include Bible readings, anthems, prayers and congregational hymns to express thanks for the Queen's reign, faith and service.

On Saturday, global music stars including Queen and Adam Lambert, Alicia Keys, Lin-Manuel Miranda, Andrea Bocelli, Ella Eyre, Craig David and Duran Duran will perform some of their biggest hits. The show, which will take place on a 360-degree stage around the Queen Victoria Memorial, will be closed by the legendary Diana Ross. Over 22,000 people are expected to attend, including more than 7,500 key workers, members of the Armed Forces, volunteers and charities. The Jubilee weekend comes to a close on Sunday with the Platinum Jubilee Pageant.

The UK government has extended licensing hours so people can celebrate in pubs and bars across England and Wales for longer than the usual 11pm closing time. Millions are also expected to sit down to a Big Jubilee Lunch over the weekend, with thousands of events planned by local councils up and down the country, including screenings, street parties, picnics and lunches.

Also, to mark the special occasion, eight UK towns were granted city status – Bangor in Northern Ireland, Colchester, Doncaster and Milton Keynes in England, Douglas in the Isle of Man, Dunfermline in Scotland, Stanley in the Falkland Islands and Wrexham in Wales. PTI AK AMS