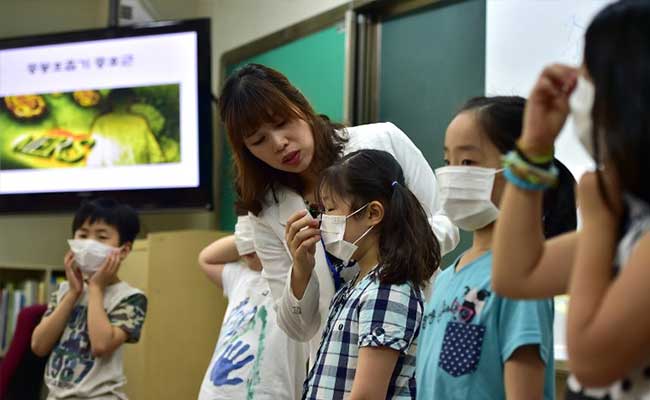 File Photo: South Korea has the most infections outside the Middle East where the disease first appeared in 2012. (Agence France-Presse)

Seoul: South Korea today reported its third death from an outbreak of the MERS virus that has infected dozens of people, seen hundreds of schools closed and caused thousands to cancel travel plans.

An 82-year-old man was diagnosed with the MERS virus in a posthumous test after he died in hospital on Wednesday night, the health ministry said in a statement.

He was originally being treated for asthma and pneumonia but was placed under quarantine after other patients in his ward tested positive for Middle East Respiratory Syndrome (MERS).

The latest case brought the total number of people diagnosed with the potentially deadly virus in South Korea to 36, the largest outbreak outside Saudi Arabia.

More than 900 schools, from kindergartens to colleges, have now shut their gates and the government's MERS hotline took more than 3,000 calls on Wednesday as public fears have grown.

Before today only two people, a 58-year-old woman and a 71-year-old man, had died in South Korea from the disease, which has no cure or vaccine.

The first case, reported on May 20, was of a 68-year-old man diagnosed after a trip to Saudi Arabia.

Since then, more than 1,660 people who may have been exposed to the virus have been placed under varying levels of quarantine.

While around 160 were isolated at state-designated facilities, most were told to stay home and strictly limit their interactions with other people.

In Seoul, growing public concern has been reflected in the daily increase in the number of commuters wearing face masks on buses and subways.

The anxiety has been exported, with the Korea Tourism Organisation (KTO) reporting today that around 7,000 tourists - mostly from China and Taiwan - had cancelled planned group trips to South Korea.

"A mass cancellation of this scale is very unusual... and many travellers cited the MERS outbreak as the main reason," a KTO spokesman told AFP.

The military has also been affected with more than 20 symptomatic soldiers quarantined, including six who had contact with a South Korean air force officer recently diagnosed with MERS.

The officer was serving at the air base in Osan, south of Seoul, which also hosts the US 51st Fighter Wing.

"Our hospital has established a plan to care for our population as well as screening those coming onto Osan," Colonel Brook Leonard wrote on the unit's official Facebook page.

President Park Geun-Hye's administration, and health officials in general, have been criticised for responding too slowly to the initial outbreak.

In an emergency meeting with health officials on Wednesday, Park called for "utmost efforts" to curb the spread of the virus and ease public fear.

MERS has now infected 1,161 people globally, with 436 deaths. More than 20 countries have been affected, with most cases in Saudi Arabia.

The virus is considered a deadlier but less infectious cousin of Severe Acute Respiratory Syndrome (SARS), which killed hundreds of people when it appeared in Asia in 2003.

The World Health Organisation said it expected more infections in South Korea, but stressed that there was "no evidence of sustained transmission in the community".

The South's Unification Ministry said it had agreed to a request from North Korea to provide thermal-imaging cameras to screen arrivals at their joint industrial zone in Kaesong.

Kaesong lies 10 kilometres (six miles) over the border in North Korea, and around 500 South Koreans travel there every day to manage factories that employ some 53,000 North Korean workers.