Ekaterina Lisina won a bronze medal playing for Russia in the 2008 Olympics in Beijing. 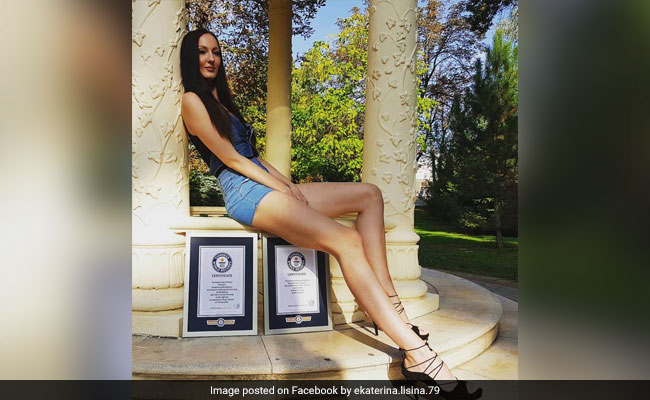 Her left and right leg measure 132.8 cm and 132.2 centimetres respectively.

Moscow: A Russian model has set a new Guinness world record for the longest legs - measuring an unparallelled 132 centimetres in length.

Ekaterina Lisina, 29-year-old woman from Russia also broke the Guinness record for being the tallest female professional model with a height of 6 feet 8.77 inches.

Her left and right leg measure 132.8 cm and 132.2 centimetres respectively.

As required by the Guinness World Records guidelines, the measurements were taken by independent professionals - a seamstress and doctor - from the heel to the top of the hip.

Lisina said that she was bullied in school for her height and she wanted "to be an inspiration to girls who are not very confident."

Lisina has trouble finding trousers that fit her, and finds it very awkward squeezing into airplane and car seats.

With a shoe size of 47, it is also difficult for her to find feminine shoes.

However, there are also some benefits to having the longest legs in the world, she said.

Her height has also helped her basketball career, and she won a bronze medal playing for Russia in the 2008 Olympics in Beijing.

In spite of her sporting prowess, Lisina always wanted to be model - so she gave up playing basketball in order to pursue this dream.

She has now been working as a professional model for over a year.

The record for the world's longest legs was previously held by Svetlana Pankratova, also from Russia.

Promoted
Listen to the latest songs, only on JioSaavn.com
Pankratova legs are slightly shorter than Lisina's, at 132 cm (51.9 inches).