Russian lawmakers stripped of voting rights at Council of Europe 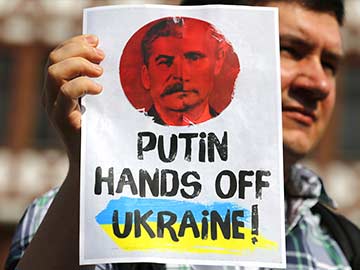 An anti-Russian protester holds up a sign during a rally in Frankfurt, Germany. (File photo)

Strasbourg, France: Russian lawmakers at the Council of Europe's parliamentary assembly were stripped of their voting rights until the end of 2014 today over Moscow's annexation of Crimea.

The assembly at the Council, a body that has no legislative powers but promotes cooperation on human rights and democracy between European countries, gathers lawmakers from the parliaments of 47 member states, including 18 Russians and 12 Ukrainians.

Out of those lawmakers present today in the French city of Strasbourg, where the council is based, 145 voted for the resolution stripping the Russians of voting rights, 21 against and 22 abstained.

The Russian lawmakers boycotted the debate over the resolution, describing it as a "farce".

Promoted
Listen to the latest songs, only on JioSaavn.com
The decision comes as pro-Russian militants have occupied government buildings in the east of Ukraine, in an echo of what happened in Crimea before the peninsula was annexed by Moscow last month.