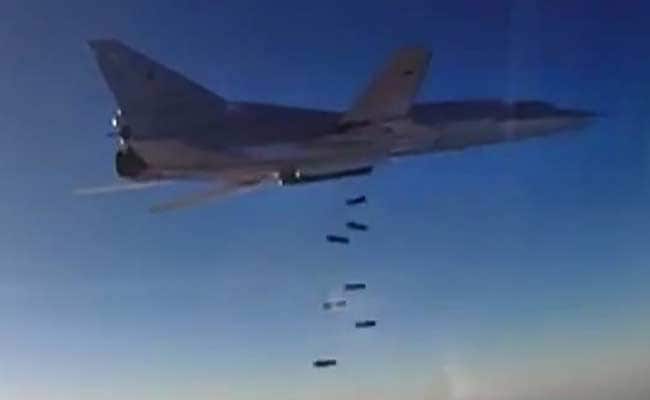 Syria: Russia today dismissed a suggestion from Washington that Moscow is violating a UN Security Council resolution by using an Iranian air base for its bombing raids on Syria.

Foreign Minister Sergei Lavrov denied that Moscow could be in breach of a ban on supply or transfer of warplanes to Iran without prior approval of the United Nations Security Council.

"There are no grounds to suspect Russia of breaching the resolution," Lavrov said at a news conference in Moscow.

Russia on Tuesday began flying warplanes from an Iranian airbase in a major switch in its bombing campaign in Syria that the United States condemned as "unfortunate".

Russian forces took off from the Iranian base to carry out a fresh round of strikes on Wednesday morning.

Russia has previously only flown raids out of its bases in Syria and Russia.

On Tuesday, US State Department spokesman Mark Toner said Russia's use of the Iranian base "could very well be a violation" of a UN Security Council resolution that requires its prior approval for the supply, sale or transfer of warplanes to Iran.

But Lavrov insisted that "in the case we are discussing now, there was neither the sale, nor supply, nor transfer of warplanes to Iran".

"These warplanes with the consent of Iran are being used by the Russian air force to participate in an anti-terrorism operation in Syria at the request of the legal Syrian authorities," he said.

"There's nothing even to discuss here."

Defence ministry spokesman Igor Konashenkov suggested that Washington needed to brush up on the specifics of the resolution.

He added that the US-led coalition's bombing raids on Syria from Turkey's Incirlik air base are not permitted by the United Nations charter.

Today morning, Russia sent Sukhoi Su-34 jets from the Hamedan base in western Iran to carry out a group aerial strike against IS targets in Deir Ezzor province, the defence ministry said, calling the operation a success.

The strikes with high-explosive fragmentation bombs "destroyed two command centres and large field camps for training terrorists in the area of the town of Deir Ezzor, killing more than 150 fighters including foreign mercenaries," the ministry said.

Iran also defended Russia's use of the base, with Ali-Akbar Velayati, top advisor to the Supreme Leader, telling Tasnim news agency that "the presence of Iran and Russia at the request of Syrian government is legal".

Iran is acting "within the framework of international regulations" and "does not accept the Americans' view," he said.

"The only action taking place is that Russian fighters are allowed to use this base to refuel," said Alaeddin Boroujerdi, chairman of parliament's National Security and Foreign Policy Commission.

He stressed that this does not breach the Iranian constitution which bans foreign deployments on its soil.

Defence consultancy IHS Jane's said Wednesday that Moscow is apparently expanding its Mozdok airbase in southern Russia, from where long-range bombers had been flying their Syria raids, with a "second runway" being constructed since May or June.

Iran and Russia are the two staunchest backers of the regime of President Bashar al-Assad, with Tehran commanding thousands of troops fighting for him on the ground while Russia provides airpower.

Both oppose calls for Assad to step down as a way of resolving the conflict that has killed more than 290,000 people since it erupted in March 2011.