Russia's top diplomat Sergev Lavrov said that Britain should have sent Moscow an official request about the substance used on its soil. 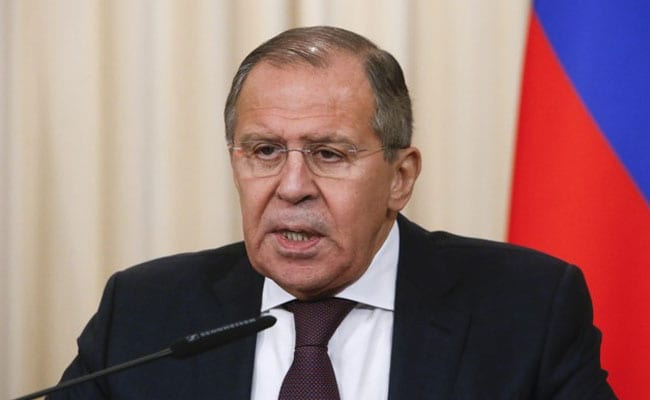 Moscow, Russia: Moscow on Tuesday denied it was behind the poisoning of a former double agent in Britain as a midnight deadline loomed to explain how a Russian-made nerve agent was used in the attack.

"Russia is not guilty", said Foreign Minister Sergei Lavrov of the attack on Sergei Skripal and his daughter in an English city on March 4.

The United States, NATO and the European Union have all backed Britain in the deepening diplomatic crisis.

Lavrov added that Russia was "ready to cooperate", but said Britain had rejected its requests for "access" to the nerve agent samples.

British Prime Minister Theresa May told  parliament it was "highly likely" Russia was behind the poisoning, giving Moscow until the end of Tuesday to answer the accusations.

Foreign Secretary Boris Johnson said the attack was the "first use of nerve agent on the continent of Europe since the end of the Second World War". He vowed that Britain's response if it concludes Russia was responsible would be "commensurate".

May has said that her government was considering a British version of the US "Magnitsky Act", which was adopted in 2012 to punish Russian officials accused of human rights violations.

Skripal, 66, and his daughter Yulia, 33, remain in a critical condition in hospital after being found unconscious on a bench outside a shopping centre in the southwestern city of Salisbury.

Emergency workers in biohazard suits have been deployed in the normally sleepy city, while about 500 people who may have come into minimal contact with the nerve agent were urged to wash clothes and belongings as a precaution.

'They will not recover'

May told British lawmakers that Moscow had previously used a group of nerve agents known as Novichok, had a history of state-sponsored assassinations and viewed defectors such as Skripal as legitimate targets.

She demanded Moscow disclose details of its development of the Novichok nerve agents programme to the Organisation for the Prohibition of Chemical Weapons (OPCW).

The chemical weapons watchdog said Tuesday that it was "extremely worrying that chemical agents are still being used."

Vil Mirzayanov, a chemist who worked on the Novichok programme and now lives in the United States, was quoted as saying that the nerve agent's effects were "brutal".

"These people are gone -- the man and his daughter. Even if they survive they will not recover," he was quoted as saying.

US Secretary of State Rex Tillerson said Washington has "full confidence" in the British investigation.

"We agree that those responsible -- both those who committed the crime and those who ordered it -- must face appropriately serious consequences," he told reporters.

"We stand in solidarity with our allies in the United Kingdom."

NATO Secretary General Jens Stoltenberg said the incident was "of great concern", as the The Daily Telegraph newspaper reported that Britain was consulting NATO allies about possibly invoking its Article 5 principle of common defence.

Russian President Vladimir Putin brushed aside questions about Moscow's involvement in the attack on Monday, telling the BBC: "Sort things out from your side and then we will discuss this with you."

Moscow on Tuesday summoned the British ambassador over the accusations, having earlier called them "a circus show" to undermine its hosting of this summer's football World Cup.

Britain's Home Secretary Amber Rudd later on Tuesday will chair a meeting of the government's emergency Cobra committee for an update on the investigation, her office said.

- 'Sophisticated' poison -
Skripal, an ex-military intelligence officer who was jailed for selling Russian secrets to London, moved to Britain in a spy swap in 2010, settling in Salisbury.

Police are investigating the attack with the assistance of Britain's armed forces and its military research laboratory at Porton Down.

The BBC reported that investigators now believe the nerve agent may have been deployed in powder form through the ventilation system of Skripal's car.

Promoted
Listen to the latest songs, only on JioSaavn.com
Other reports in the British media hinted at growing pressure on May for England to boycott the World Cup in Russia.

"How can we go to Putin's World Cup now", read the headline of the Daily Mail.