The suspects include five Russians and "three Ukrainian and Armenian citizens," Russia's Federal Security Service said in a statement. 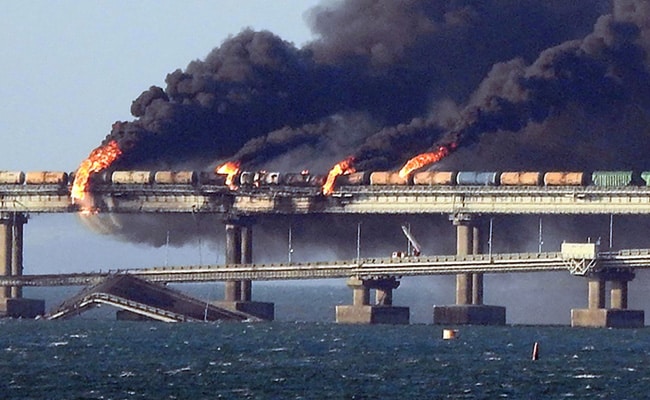 The bridge is vital for moving military equipment to Russian soldiers fighting in Ukraine.

Russia has detained eight suspects over the deadly explosion on the bridge linking annexed Crimea to Russia, the Federal Security Service (FSB) said in a statement quoted by news agencies on Wednesday.

The suspects include five Russians and "three Ukrainian and Armenian citizens," it said, without providing more details.

The rolls left on a boat in August from the Ukrainian port of Odessa to Bulgaria. They then transited through the port of Poti in Georgia, then sent overland to Armenia before arriving by road in Russia, according to the FSB.

The explosives entered Russia on October 4 in a truck with Georgian license plates and reached the region of Krasnodar on October 6, two days before the blasts, the FSB said.

The "terrorist attack" was organised by Ukrainian secret services, with a Kyiv agent having coordinated the transit of the explosives, according to the FSB.

On Saturday, a blast ripped through the road and rail bridge connecting Crimea to Russia, killing three people, causing damage and igniting a massive fire.

The bridge is logistically crucial for Moscow -- a vital transport link for moving military equipment to Russian soldiers fighting in Ukraine.

It is also hugely symbolic, with President Vladimir Putin having personally inaugurated the structure in 2018.

The blast sparked celebrations from Ukrainians. Russia blamed the explosion on Kyiv on Sunday and on Monday launched missile attacks across Ukraine, killing at least 19 people and wounding more than 100.