Chanel has barred Russians from using its bag inside their country, a move part of the sanctions against Moscow for launching Ukraine war. 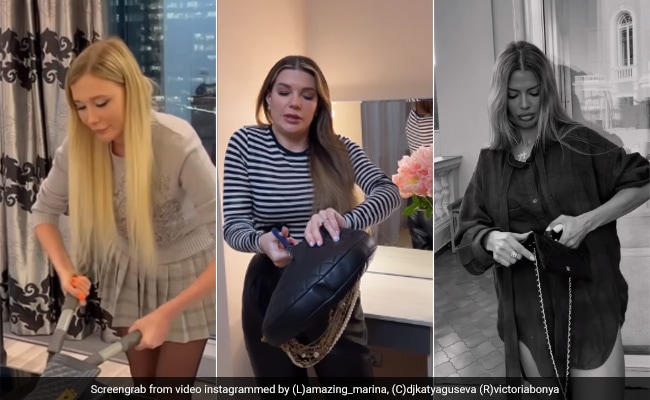 Some wealthy Russian women are cutting up their expensive Chanel bags in protest against the move by the company to bar them from making fresh purchases. Due to the Ukraine war, the luxury brand has stopped selling bags to Russians who intend to use them in their country.

These women - models, television presenters and disco jockeys - have filmed themselves taking a pair of scissors to their Chanel bags and cutting it into pieces.

Model Victoria Bonya is among the women who has posted these videos, expressing her outrage to her 9.3 million followers. Russian television presenter and actor Marina Ermoshkina also did the same thing, telling her nearly three lakh followers that she is against “Russophobia-supporting brands”.

“Not a single item or brand is worth my love for my motherland and my self-respect,” Ermoshkina is heard saying in the Instagram video before cutting her bag.

“If owning Chanel means selling my Motherland, then I don't need Chanel,” she further says.

Thirty-nine-year-old DJ Katya Guseva also posted a video saying “No” to Chanel. “To show you I am serious, I will simply cut up this bag. I don't need it any more. Bye-bye, Chanel,” she tells her supporters, urging them to do the same.

However, none of these celebrities showed any concern about the millions who have been left homeless because of Russia's invasion, or thousands who have lost their lives. The sentiment was echoed by some users who commented on these women's Instagram posts.

“Respect you? Maybe you should comment on atrocities and war crimes in Ukraine instead of acting like a victim…” a user said in response to Bonya's video.

According to The Independent, Chanel's move is aimed at implementing European Union sanctions that ban the export of luxury goods costing more than $328 to Russia.

Some users have posted tweets showing Chanel executives asking them to sign a paper in Dubai, where Russians are free to travel, assuring that they won't use the bag in their country.

The company acknowledges that its decision has “disappointed” its customers, and is working to improve this approach. Chanel has already shut its stores in Russia.