RSS, BJP "Think Of Ram Only Before Elections", Says Congress

The RSS, earlier Friday, said that an ordinance would be needed if all other options for constructing Ram temple in Ayodhya were exhausted. 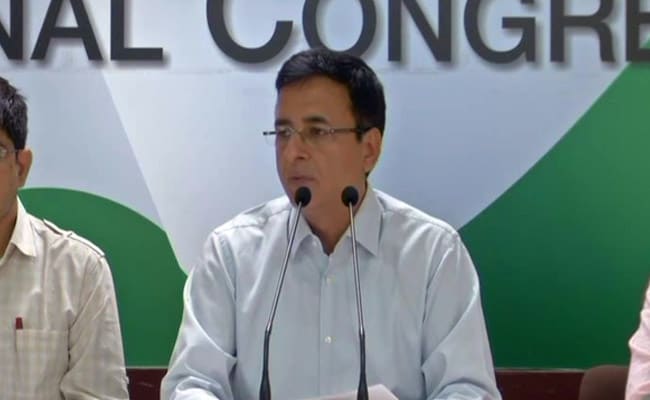 Likening the RSS and the BJP to Manthara and Kaikeyi respectively -- the characters from epic Ramayana -- the Congress on Friday accused the two organisations of consigning Lord Ram to "exile" for the last three decades.

At a press conference here, Congress spokesperson Randeep Singh Surjewala said the two organisations "think of Ram only before elections".

The RSS, earlier Friday, said that an ordinance would be needed if all other options for constructing Ram temple in Ayodhya were exhausted.

"RSS is the Manthara and BJP the Kaikeyi who have exiled Lord Ram for the past three decades," Mr Surjewala said, invoking the characters from Ramayana who scheme to send Ram, the hero of the epic, into an exile in forest.

"They remember Ram only before elections," he said, when asked about Congress' views on BJP MP Rakesh Sinha's announcement that he will introduce a private member's bill for construction of Ram temple in Ayodhya.

"Why Congress should react to an assistant lecturer's (Sinha) announcement? He is not the prime minister or BJP chief or home minister or law minister," Mr Surjewala said.

Mr Sinha, a BJP nominated member to the Rajya Sabha, is also an assistant professor at the Motilal Nehu College of the Delhi University.

To another question, Mr Surjewala termed the Congress as "Pandavas", the virtuous five brothers of the Mahabharata.

After a three-day RSS conclave in Maharashtra's Thane district, its general secretary Bhaiyyaji Joshi said the organisation "will not hesitate to launch an agitation for Ram temple, if needed, but since the matter is in the Supreme Court, there are restrictions."

Mr Joshi also said that Hindus were feeling "insulted" by the Supreme Court's declaration that the Ayodhya issue is not a priority.

Reacting to Mr Surjewala's statement, Madhya Pradesh BJP spokesperson Rajnish Agrawal said the Congress is using "foul language" because it has "lost ground" all over the country.

"The Congress is at a loss for words after being thrown out of power at the Centre and most of the states. It has no issues to talk about and is dragging BJP in every conversation," he said.