UN Should Not "Interfere" In The Rohingya Crisis: Myanmar Army Chief

No country, organisation or group has the "right to interfere in and make decision over sovereignty of a country", military-run newspaper Myawady reported Min telling troops in a speech 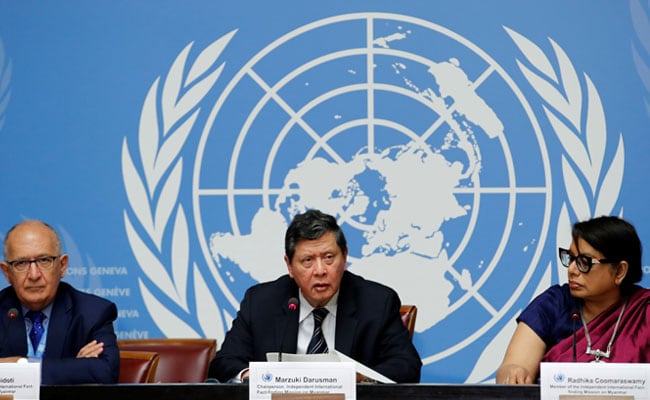 Myanmar's powerful army chief said the United Nations had no right to interfere in the sovereignty of his country, a week after UN investigators called for him and other top generals to be prosecuted for "genocide" against the Rohingya.

Min Aung Hlaing also shrugged off demands from the UN for the army to get out of political life in Myanmar, where it remains hugely influential despite a nominal transition to civilian rule in 2011.

No country, organisation or group has the "right to interfere in and make decision over sovereignty of a country", military-run newspaper Myawady reported Min telling troops in a speech Sunday.

"Talks to meddle in internal affairs (cause) misunderstanding."

The 444-page UN probe report, compiled over 18 months, outlined in meticulous and searing detail claims of atrocities against the Rohingya, who fled a violent military campaign that started in August last year.

More than 700,000 of the stateless Muslim minority took refuge in Bangladesh, where they remain, fearful of returning to Myanmar despite a repatriation deal between the two countries.

The military has denied nearly all wrongdoing, justifying its crackdown as a legitimate means of rooting out Rohingya militants.

But rights groups and the UN say the operations were vastly disproportionate and that a troop build-up in the area occurred before insurgents attacked police posts in August 2017.

In a further ratcheting up of pressure on Myanmar, the ICC independently ruled that it had jurisdiction to open a preliminary investigation, even though the country has not signed the treaty underpinning the court.

Analysts say, however, that any road to prosecution would be long and fraught with political difficulties.

Last month Facebook removed the pages of Min Aung Hlaing and other top generals, accusing them of sowing ethnic divisions in a country where the social media platform enjoys excessive influence.

Suu Kyi's government shares power with the still-mighty army, which retains control over a quarter of parliamentary seats and three key ministries.

The UN team also criticised the Nobel Laureate's government for "acts and omissions" that had "contributed to the commission of atrocity crimes".

In a rare, if understated, criticism of the military, Suu Kyi recently said that the Rakhine crisis "could have been handled better".

The army chief made it clear that the Tatmadaw, as the military is known locally, has no intention to extract itself from politics.

"Take a look at the democracy practices in the world, the countries exercise the democracy system suited to them," he said, adding that the country needs to end armed conflict on its road to true multi-party democracy.

"The Tatmadaw will continue its efforts to achieve eternal peace," he said.

The Rohingya languishing in refugee camps in Bangladesh refuse to return to a Myanmar that does not grant them citizenship.

In his speech the army chief doubled down on the narrative widely held in Myanmar that the minority are outsiders, calling the "Bengalis" and insisting that the law, which does not recognise the group among the country's many ethnicities, will remain in place

(Except for the headline, this story has not been edited by NDTV staff and is published from a syndicated feed.)
Comments
RohingyaRohingya muslim in MyanmarRohingya Genocide in Myanmar