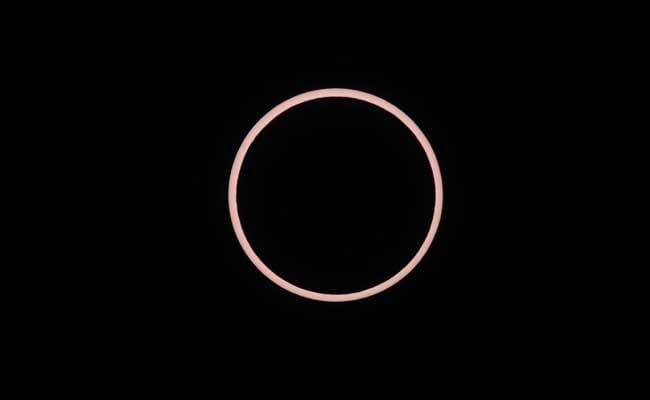 Sarmiento: Stargazers applauded as they were plunged into darkness Sunday when the moon passed in front of the sun in a spectacular "ring of fire" eclipse.

Astronomers and enthusiasts in Argentina were among the first to see the so-called annular eclipse as it crossed South America shortly after 1200 GMT, on course for Africa.

Staring up through special telescopes, protective glasses or homemade cardboard pinhole devices, they watched the Sun all but disappear briefly as the Moon crossed its path.

The eclipse was most visible in a 100-kilometer (62-mile) band across Chile, Argentina, Angola, Zambia and the Democratic Republic of Congo.

Around 300 stargazers gathered in a remote spot near the southern city of Sarmiento, the point in Argentina where the eclipse left just a bright ring in the dark sky.

"I have already seen six annular eclipses and each one was different," said Josep Masalles Roman, an enthusiast who came all the way from Barcelona in Spain.

The spectacle passed on to Angola south of the town of Benguela, then Zambia and DR Congo just before the Sun set.

In Angola's capital Luanda, few seemed aware of the unusual event in the skies above, but those with forewarning got a glimpse of the eclipse for around 15 minutes from 1630 GMT.

"It's the first time that I've witnessed this phenomenon -- I'm completely happy," said stargazer Providencia Luzolo. "It's just I didn't manage to see it that well as it hurt my eyes."

An annular solar eclipse occurs when the Earth, Moon and Sun line up.

But even when perfectly aligned, the Moon is too far from Earth to completely block out the Sun, creating instead the impression of a fiery ring.

Terry Moseley of the Irish Astronomical Association warned that viewers should not observe the eclipse with the naked eye.

According to the Astronomical Society of Southern Africa (ASSA), such eclipses can be safely observed using a basic pinhole projector.
Punch a tiny hole in a piece of paper with a sharp pencil, hold it into the Sun, and project the image onto a second sheet.

The gaps between tree leaves make for a similar effect on the ground, says the ASSA website, calling this "the coolest and safest way to watch a solar eclipse".

"As about 90 percent of the Sun is covered, you'll notice a distinct drop in temperature and brightness, and a change in the quality of the light which is hard to describe," Moseley told AFP.

Locals in the province of Chubut around Sarmiento said they noted changes in the height of the tide and animals acting unusually.
Experts say that as the day darkens, birds and animals enter a night-time routine, thinking sunset is nigh.

At the height of the eclipse the Moon is right in the middle of the Sun, leaving a perfect ring of light around the edge.

It takes about two hours for the Moon to move across the face of the Sun, but the "ring of fire" peak lasts a mere minute.

Starting in the southeast Pacific Ocean at sunrise, the eclipse passed over southern Chile then Argentina before sweeping over the South Atlantic.

Promoted
Listen to the latest songs, only on JioSaavn.com
At sea, the eclipse peak was to last 44 seconds and "only be visible to any ships that happen to be in the right place at the right time," said Moseley.

(This story has not been edited by NDTV staff and is auto-generated from a syndicated feed.)
Comments
Ring of Firesolar eclipse 2017AfricaSouth America