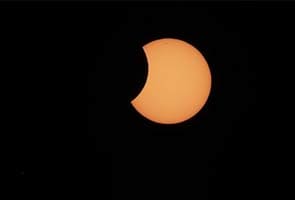 Sydney: Skygazers across the Australian Outback were among the lucky few to witness a solar eclipse on Friday as the moon glided between Earth and the sun, blocking everything but a dazzling ring of light.

The celestial spectacle, known as a "ring of fire" eclipse, is the second solar eclipse visible from northern Australia in six months. In November, a total solar eclipse plunged the country's northeast into darkness, delighting astronomers and tourists who flocked to the region from across the globe to witness it.

Friday's eclipse, also called an annular solar eclipse, is not considered as scientifically important or dramatic as November's, because the moon is too far from Earth - and therefore appears too small - to completely black out the sun. Unlike a total solar eclipse, which essentially turns day into night, an annular eclipse just dims the sunlight.

"A total eclipse is overall far more spectacular, far more emotional," said Andrew Jacob, an astronomer at Sydney Observatory. Still, he said, Friday's eclipse "will give you a nice ring of sunlight in the sky - it will be quite different."

At remote outposts across Australia, scientists and spectators gathered to watch as the eclipse began casting its approximately 200-kilometer-wide (120-mile-wide) shadow at dawn over Western Australia, before moving east through the Northern Territory and the top of Queensland state. The shadow was drifting across Papua New Guinea, the Solomon Islands and the tiny island nation of Kiribati, and will eventually end in a largely uninhabited area of the Pacific Ocean.

The eclipse lasted between three and six minutes, depending on its location, and blacked out around 95 per cent of the sun at its peak. A partial eclipse was visible to people in other parts of Australia, Indonesia, New Zealand and the South Pacific.

U.S. astronomer Jay Pasachoff, who travelled to Australia to view his 57th solar eclipse, drove to a remote hill in the Outback about 50 kilometres (30 miles) north of the Northern Territory town of Tennant Creek, where he and around 100 others enjoyed one of the best and longest views of the eclipse in Australia.

Amateur astronomers clicked away on cameras and local high school students measured the drop in temperature as the moon moved in front of the sun and blocked out much of the light. The moment, Pasachoff said, was magical.

Promoted
Listen to the latest songs, only on JioSaavn.com
"The colour of the light changes in an eerie fashion, and you sense that something very strange and weird and wonderful is going on," said Pasachoff, an astronomy professor at Williams College in Massachusetts.