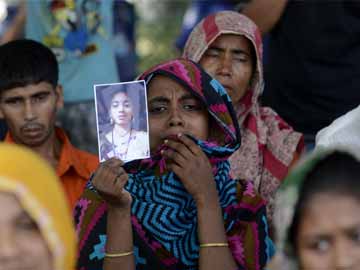 Thousands of people, some wearing funeral shrouds, staged demonstrations at the site of the now-infamous Rana Plaza factory complex outside the Bangladeshi capital Dhaka, which collapsed last April 24 after a catastrophic structural failure.

Chanting slogans of "We want compensation!" and "Death to Sohel Rana!", the owner of the shoddy building, the demonstrators -- who included injured survivors and the families of the deceased -- marched to the ruins of the nine-storey building carrying flowers and wreaths.

Relatives of the 140 workers still unaccounted for also joined in, calling on the government to help find their bodies. They included toddlers, holding photos of their missing mothers.

"I want my daughter's dead body. At least it would give us some consolation," said crying mother Minu Begum, clutching the photo of her missing daughter Sumi Begum, who worked at one of Rana Plaza's five factories.

For the first time since the disaster, when the site was sealed off, relatives of the dead and survivors were allowed inside. Some fell to the ground, sobbing and grabbing handfuls of dirt.

Global labour and rights groups marked the day by criticising the Western retailers linked to the disaster, which include Spanish brand Mango, Italian brand Benetton and French retailer Auchan.

"First they failed to ensure the factories they bought from were safe, and now they are failing the survivors and the families of those who lost loved ones."

Three lobby groups said Thursday they had filed a judicial complaint against French supermarket giant Auchan in the first such case in Europe in the wake of the factory disaster.

The company said it had never placed any orders at the Rana Plaza garment factory but the groups accused Auchun of misleading customers about working conditions overseas and claimed that an investigation found labels from the chain's "In Extenso" range in the rubble.

As well as the dead, more than 2,000 people were injured in a tragedy that put the spotlight on the lax safety standards and often abusive working conditions in the world's second-biggest clothing producer.

But trade union group IndustriALL slammed retailers this week for making "woefully inadequate" contributions to a proposed $40-million fund set up to compensate the families of the dead and the injured.

Of the 29 Western brands who sourced clothes from Rana Plaza factories, about half have deposited $15 million into the fund, the Clean Clothes Campaign said. The first payments of $640 for each of the survivors and families of the deceased were only made this week.

British retailer Primark has made the largest contribution of $7 million.

Families are angry at local authorities for the slow progress in identifying the workers still missing, while the owner of the building has yet to be charged by police.

"One year after Rana Plaza collapsed, far too many victims and their families are at serious risk of destitution," said Phil Robertson of Human Rights Watch.

After the backlash, nearly 200 brands formed two umbrella groups to organise a clean-up of Bangladesh's 3,500 garment factories, which form a $22-billion industry second only to China's in size.

They reject criticism that they have done too little.

"Our members alone paid $2.2 million into the trust fund," said Mesbah Rabin, managing director of the Alliance for Bangladesh Worker Safety, which includes US retailers Walmart, Gap and Target.

"The brands are also paying for the costly inspection of the garment factories, which will eventually raise safety standards, boost export potential and improve Bangladesh's brand image that the country is a safe destination for sourcing apparel," he told AFP.

'Faults in almost all factories'

Despite disagreements over who has ultimate responsibility for the victims -- Western retailers, their Bangladeshi subcontractors, or the government -- most observers credit the industry with making some progress.

Engineers hired by retailers have shut down 16 factories and ordered hundreds of others to upgrade. A manufacturers' group closed another 23 plants.

According to the newly created Department of Inspection for Factories, at least 1,031 factories have since been inspected by retailers' groups and government officials.

"We have found faults in almost all the factories we've so far inspected," said Brad Loewen, chief inspector of a group of largely European retailers called the Accord on Fire and Building Safety in Bangladesh -- the second umbrella organisation.

The shutdowns and upgrades have resulted in thousands of job losses and hundreds of million of dollars of cancelled orders, according to the manufacturers.

But the industry continues to go from strength to strength despite the bad publicity and a 77 percent wage hike for workers which was resisted by factory owners.

Promoted
Listen to the latest songs, only on JioSaavn.com
Garment shipments have grown 15 percent year-on-year since the disaster, and minimum wages were raised to $68 a month on average in December from $38 previously.