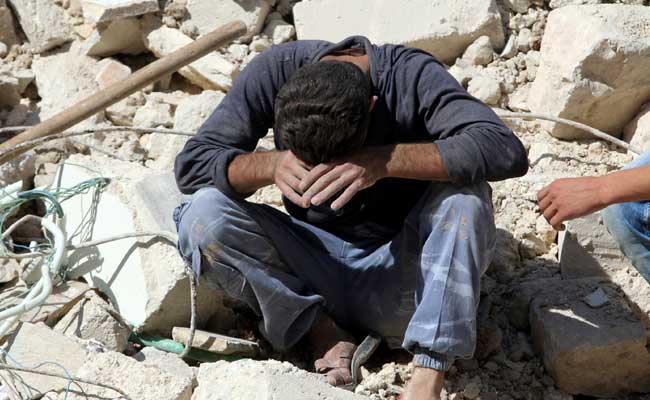 A man on rubble of damaged buildings after losing relatives to an airstrike in Aleppo. (Reuters)

Beirut, Lebanon: Renewed bombing of rebel-held eastern Aleppo has killed more than 150 people this week, rescue workers said on Thursday, as the Syrian government steps up its Russian-backed offensive to take the whole city.

Air strikes against rebel-held areas of eastern Aleppo had tapered off over the weekend after the Syrian army announced it would reduce raids for what it described as humanitarian reasons. But the strikes have intensified since Tuesday.

"The bombing started at 2 am and it's going on till now," he said.

Aleppo has been divided between government- and rebel-controlled areas for years. More than 250,000 people are believed to be trapped in eastern Aleppo, the rebels' most important urban stronghold, facing shortages of food, fuel and medicine.

The Civil Defence is a rescue service operating in rebel-held parts of Syria.

Syrian military officials could not immediately be reached for comment on the latest situation in Aleppo. The Syrian and Russian governments say they only target extremists.

In a government-held area of western Aleppo, at least four children were killed and 10 wounded on Thursday when shells landed near a school, the Syrian Observatory for Human Rights reported.

Promoted
Listen to the latest songs, only on JioSaavn.com
Syrian state news agency SANA said the school in the al-Suleimaniya area had been targeted in what it described as a terrorist attack.