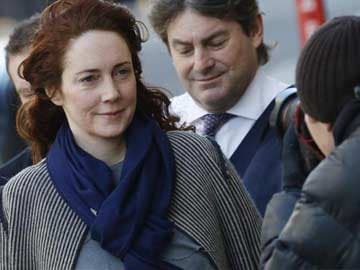 Mrs Brooks denies conspiring to hack phones while she edited the paper between 2000 and 2003. (File photo)

London: Rebekah Brooks, the former head of Rupert Murdoch's British newspaper unit, arrived in court on Wednesday as she prepared to take the stand in the phone-hacking trial.

After nearly four months of hearings, lawyers for Mrs Brooks, a former editor of the now-defunct News of the World tabloid, were due to begin presenting the case for the defence.

Mrs Brooks denies conspiring to hack phones while she edited the paper between 2000 and 2003, specifically conspiring to illegally access the voicemails of missing schoolgirl Milly Dowler, who was later found murdered.

The allegation that Ms Dowler's phone had been hacked proved the final straw in a slow drip of revelations about phone hacking at the News of the World, prompting Murdoch to summarily shut down the 168-year-old Sunday tabloid in July 2011.

Mrs Brooks, who by then had risen to chief executive of News International, Mr Murdoch's British newspaper division, resigned and shortly afterwards was arrested on hacking charges.

The 45-year-old is in the dock with Andy Coulson, her deputy at the News of the World who replaced her as editor when she moved to edit The Sun, another Murdoch title, in 2003.

Mr Coulson, who went on to become Prime Minister David Cameron's media chief, denies conspiracy to hack phones between 2000 and 2006, when he stepped down as editor.

Another senior News of the World executive, former managing editor Stuart Kuttner, is also on trial.

Promoted
Listen to the latest songs, only on JioSaavn.com
In related charges, Mrs Brooks is accused of hiding evidence from the police, allegedly aided by her husband Charlie, former PA Cheryl Carter and head of security Mark Hanna.

She faces of further charge of conspiring to pay a defence ministry official for stories.