Zookeeper Louise Ginman said the move from the dens to the outdoors for the cubs, which were born on January 17, posed a challenge for their mother, Kartika. 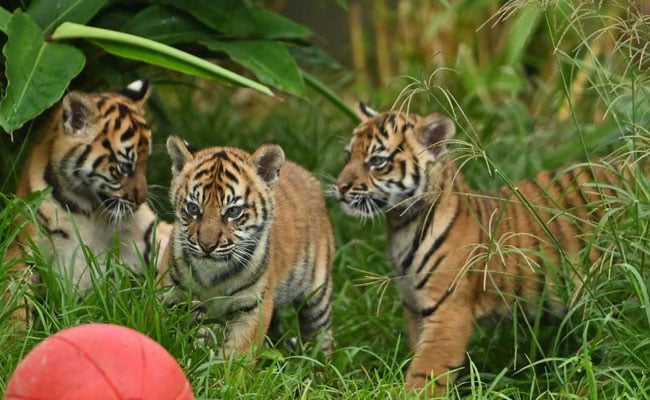 Three rare Sumatran tiger cubs ventured into public view for the first time Friday in what Sydney zookeepers called a "wonderful success" for the future of the critically endangered species.

Two female cubs -- Mawar, which means "rose" in Indonesian, and Tengah Malam ("midnight") -- and their brother Pemanah ("archer") were allowed outside their closed dens to explore the more natural outdoor tiger compound at Sydney's Taronga Zoo.

Zookeeper Louise Ginman said the move from the dens to the outdoors for the cubs, which were born on January 17, posed a challenge for their mother, Kartika.

"Now that they are moving about a larger space and learning to climb terrain, she will have a much harder time controlling them," Ginman said.

Sumatran tigers are classified as critically endangered, with as few as 350 remaining in patches of forest on the Indonesia island of Sumatra, where their natural habitat has been devastated by illegal wildlife trade and jungle clearing for palm oil plantations.

"This birth is such a wonderful success for the conservation of this fragile species, and I am so excited that we can now invite guests to share our joy," Gilman said.

"It's such a shock that these three little cubs represent one per cent of the remaining wild population, but with zoo-based conservation programs worldwide and the support of our guests here in Sydney, there's still hope for the future of this species," she said.