On the afternoon of Friday, April 7, Rakhmat Akilov stole a beer delivery truck and barrelled down a bustling pedestrian shopping street, swerving wildly to hit as many people as possible before smashing into the facade of a department store. 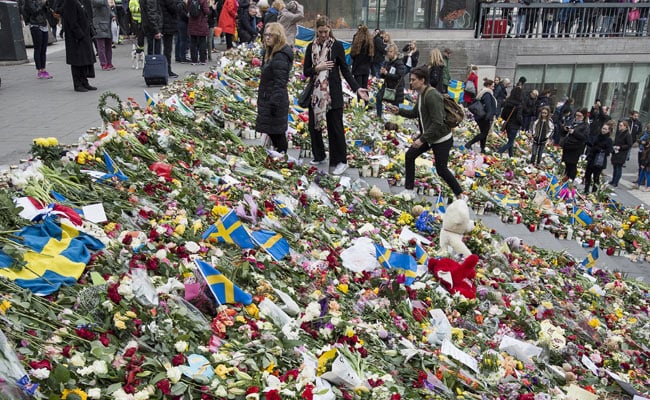 People gathered at a makeshift memorial in April, 2017 to commemorate the victims of terror attack

Stockholm, Sweden: An Uzbek asylum seeker who confessed to wanting to mow down "infidels" in an April 2017 Stockholm truck attack that killed five people goes on trial Tuesday accused of terrorism.

Rakhmat Akilov had sworn allegiance to the ISIS on the eve of his assault in one of Europe's safest cities, though the terrorist group never claimed responsibility.

The prosecution's charge sheet, presented in late January, paints a picture of a lonely illegal alien working odd construction jobs who drank alcohol and took drugs, and who acted alone.

On the afternoon of Friday, April 7, Akilov stole a beer delivery truck and barrelled down a bustling pedestrian shopping street, swerving wildly to hit as many people as possible before smashing into the facade of a department store. He killed five and injured 10.

"I was walking down the street ... and you don't expect something like that to happen... All of a sudden, this truck ran me over," Irina Zamanova, a 38-year-old Ukrainian woman who lost her lower right leg in the attack, told AFP.

She said it was important for her to attend the trial and testify even though it would be "trying" to relive the events of that day.

Akilov, born in 1978, was arrested in a Stockholm suburb hours after his attack thanks to public transport video surveillance footage, and confessed.

He faces charges of "terrorism and attempted terrorism". The trial is scheduled to last through May, with a verdict due in June.

According to the charge sheet, Akilov wanted to "instigate fear among the public" and "force Sweden's government and parliament to end Sweden's participation in military training of the global coalition against ISIS in Iraq".

The trial opens seven months ahead of Sweden's legislative elections, where security is shaping up to be one of the main campaign themes.

The trial is expected to focus on Akilov's intentions: Was it premeditated? Was there a religious motive? Or was it the act of a desperate man?

Akilov is scheduled to address the court as of February 20.

He arrived in Sweden in 2014, at the start of the big migration wave to Europe. His application for Swedish residency was rejected in 2016, after which he went underground.

Akilov's wife and four children had stayed behind in Uzbekistan.

Prosecutors believe he acted alone, but the investigation has revealed he chatted with unidentified contacts on social media about his plans as far back as January 2017.

According to the prosecution, Akilov also searched the internet for information on terrorist groups, swearing allegiance to ISIS, possible targets, and how to build a bomb.

Uzbek police claim he tried to enter Syria from Turkey to join ISIS in 2015, but there is no proof of that.

Uzbek authorities also claim they shared intelligence with Sweden about Akilov prior to the attack, but Swedish terrorism expert Magnus Ranstorp rejects that notion.

"I don't believe that," he said, noting it is "an authoritarian government... It's very easy for them to play politics in saying that they give that information" to the Swedes.

Swedish intelligence agency Sapo had long warned against the possibility of a truck attack, but no one really believed it would ever happen.

The Scandinavian country has experienced only one other terror attack in modern times. In December 2010, a man blew himself up in a suicide attack in central Stockholm that lightly injured two passersby.

Sweden's threat assessment level has been at three, or "elevated", on a five-point scale since October 2010 with the exception of a few months in 2015-2016.

Some 300 people have left Sweden to join terrorist groups in Syria and Iraq since 2012, according to Sapo. Around 140 have returned to Sweden and 50 or so have been killed.

Europe has seen a wave of truck attacks in recent years.

Promoted
Listen to the latest songs, only on JioSaavn.com
The deadliest was in Nice, on July 14, 2016, when a truck rammed crowds leaving a fireworks display for France's national holiday, killing 86 people.

That attack was claimed by ISIS.