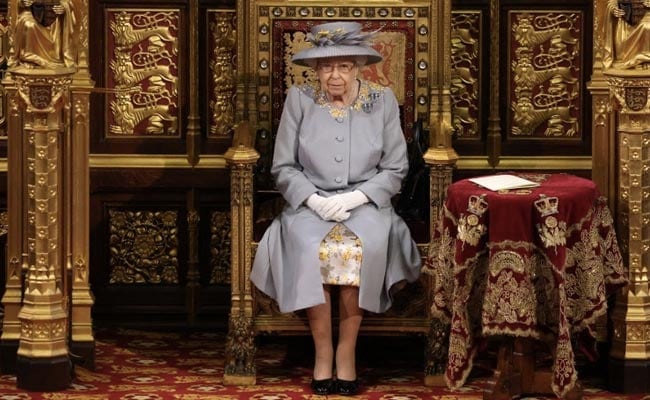 The royal family - the Queen's son and heir Prince Charles, grandsons William and Harry and their families - have gathered at her Balmoral retreat in the Scottish highlands, where she spent her last days.

The UK celebrated the Queen's Platinum Jubilee to mark 70 years of service to the nation with grand events in June.

Here are the highlights on Queen Elizabeth II's demise:

"It is with deep sadness that we learned of the death of Her Majesty Queen Elizabeth II. On behalf of the Ukrainian people, we extend sincere condolences to the entire United Kingdom and the Commonwealth over this irreparable loss," Zelenskiy wrote on Twitter.

Sporting events in Britain scheduled for Friday, including Test cricket and European golf's PGA Championship, have been cancelled as a mark of respect following the deathofQueenElizabethII.

British horse racing chiefs also pressed the pause button as tributes poured in for the late British monarch from across the sporting world.

The England and Wales Cricket Board (ECB) said Friday's play between England and South Africa in the third Test at the Oval would not take place.

"The most important events of the United Kingdom's recent history are inextricably bound with the name of Her Majesty. For many decades Elizabeth II rightfully enjoyed her subjects' love and respect as well as authority on the world stage," Putin said, according to a Kremlin statement.

Pope Francis said Thursday he was "deeply saddened" at the death of Queen Elizabeth II, offering prayers for her "eternal rest" and for her son Charles as he becomes king.

In a personal telegram to the new monarch, the head of the Catholic Church paid tribute to the queen's "life of unstinting service... her example of devotion to duty, her steadfast witness of faith in Jesus Christ", and, addressing the new Charles III, "I invoke an abundance of divine blessings as a pledge of comfort and strength in the Lord".
Sep 09, 2022 01:03 (IST)
Charles, Now King, Says Death Of Mother "Moment Of Greatest Sadness"
Queen Elizabeth II, the longest-serving monarch in British history and an icon instantly recognisable to billions of people around the world, has died aged 96, Buckingham Palace said on Thursday.
Her eldest son, Charles, 73, succeeds as king immediately, according to centuries of protocol, beginning a new, less certain chapter for the royal family after the queen's record-breaking 70-year reign.
"The death of my beloved Mother, Her Majesty The Queen, is a moment of the greatest sadness for me and all members of my family," King Charles said in a statement. Read here.
Sep 09, 2022 01:00 (IST)
Earlier this year, the Queen had announced that Prince Charles wife Camilla, the Duchess of Cornwall, would become Queen Consort when he accedes to the throne. When this will happen, Camilla will receive the Queen Mother's famous Kohinoor crown.
The Kohinoor (also spelled Koh-i-Noor) is a 105.6 carat diamond steeped in history. The diamond was found in India in the 14th century and changed many hands over the course of centuries. Read here.
Sep 09, 2022 00:45 (IST)
All The Queen's Kingdoms: Where Did Elizabeth Reign?
Charles has spent virtually his entire life waiting to succeed his mother, Queen Elizabeth II, even as he took on more of her duties and responsibilities as she aged.
But the late monarch's eldest son, 73, made the most of his record-breaking time as the longest-serving heir to the throne by forging his own path. Read here.
Sep 09, 2022 00:22 (IST)

Union Flag flies at half mast at Buckingham Palace in honour of #QueenElizabeth. pic.twitter.com/MnoiROSV1x

Sep 09, 2022 00:21 (IST)
Sex Pistols To "The Simpsons": The Many Appearances of The Queen In Pop Culture
https://www.ndtv.com/world-news/sex-pistols-to-the-simpsons-the-many-appearances-of-the-queen-in-pop-culture-3328819
From a Sex Pistols single to "The Simpsons", "The Crown" and Andy Warhol works, Queen Elizabeth's pop culture cameos were frequent and often unforgettable.
Some depictions were affectionate, others more hostile, but the monarch's indelible image in art, music and film cemented her status as one of the most recognisable people in the world. Read here.
Sep 09, 2022 00:08 (IST)
Queen Elizabeth II was one of the most recognisable people on earth, seen often but not always heard from.
Here are some of her most memorable quotes:

Queen Elizabeth Dies At 96. Here Are Some Of Her Memorable Quotes https://t.co/ZU2KFE7STEpic.twitter.com/XWsUMWbSbO

Sep 09, 2022 00:05 (IST)
Queen Elizabeth And Her Record Breaking Seven-Decade Reign
Elizabeth Alexandra Mary Windsor was not just Queen Elizabeth II. She was simply The Queen.
For billions of people, she was the one constant in a world of bewildering change, an omnipresent matriarch linking the past with the present.
While the enormous British Empire she once presided over shrank, her symbolic influence only seemed to grow, her mystique bolstered by films like "The Queen" and the Netflix series "The Crown".
Against the tide of history and logic, she made a medieval anachronism somehow modern, a stoic old lady in a hat onto whom so much could be projected.
Perhaps only the pope held as much sway, and she saw seven of them come and go during her record-breaking seven-decade reign. Read here.
Sep 09, 2022 00:03 (IST)
Prince William will likely become the Prince of Wales/Duke of Cornwall and his wife, Kate Middleton, the Princess of Wales, following the death of Queen Elizabeth on Thursday. Prince William held title of Duke of Cambridge before the Queen's death.
The title 'Prince of Wales' is reserved for the heir apparent and was held by Charles, now King. The title of 'Princess of Wales' was last held by Princess Diana because Duchess Camilla, wife of Charles, chose not to use it out of respect. Read here.
Sep 09, 2022 00:00 (IST)
Prime Minister Narendra Modi has tweeted his tribute to Britain's Queen Elizabeth II, who died today at the age of 96.
"I had memorable meetings with Her Majesty Queen Elizabeth II during my UK visits in 2015 and 2018. I will never forget her warmth and kindness," PM Modi tweeted.

I had memorable meetings with Her Majesty Queen Elizabeth II during my UK visits in 2015 and 2018. I will never forget her warmth and kindness. During one of the meetings she showed me the handkerchief Mahatma Gandhi gifted her on her wedding. I will always cherish that gesture. pic.twitter.com/3aACbxhLgC

My condolences to the people of UK and the Royal Family on the passing away of Her Majesty Queen Elizabeth II.

She had a long and glorious reign, serving her country with utmost commitment and dignity.

Sep 08, 2022 23:48 (IST)
It is no secret that the UK's plan for the eventual death of Queen Elizabeth II was codenamed London Bridge.
But there were special provisions if the monarch died when she was in Scotland, called Operation Unicorn.
The unicorn is the national animal of Scotland and forms part of the royal coat of arms, along with the lion of England.Read here.
Sep 08, 2022 23:34 (IST)
Britain's Queen Elizabeth II was the second-longest reigning monarch in history, after France's Louis XIV. The 96-year-old monarch died today. She had been dogged by health problems since October last year that left her with difficulties walking and standing.
In June this year, she overtook Thailand's King to become the world's second-longest reigning monarch.
Thailand's King Bhumibol Adulyadej reigned for 70 years and 126 days between 1927 and 2016.
Louis XIV of France remains the longest-reigning monarch, with a 72-year and 110-day reign from 1643 until 1715.Read here.
Sep 08, 2022 23:32 (IST)
"I am deeply saddened at the passing of Her Majesty Queen Elizabeth II, admired worldwide for her leadership & devotion": António Guterres, Secretary-General, UN pays his tribute.

I am deeply saddened at the passing of Her Majesty Queen Elizabeth II, admired worldwide for her leadership & devotion.

She was a good friend to the @UN & a reassuring presence through decades of change.

Her unwavering, lifelong dedication will be long remembered. pic.twitter.com/1wlZEt8PLA

Sep 08, 2022 23:27 (IST)
Earlier this month, leaked documents revealed the extent of a huge operation to be made active just after Queen Elizabeth II dies.
Details of "Operation London Bridge" were leaked to Politico, which said officials would refer to the day the Queen dies as "D Day".
The code for conveying the message that the Queen has died would be - "London bridge is down." Read here.
Sep 08, 2022 23:24 (IST)
Queen Elizabeth II, the longest-serving monarch in British history and an icon instantly recognisable to billions of people around the world, has died aged 96, Buckingham Palace said on Thursday.
Her eldest son, Charles, 73, succeeds as king immediately, according to centuries of protocol, beginning a new, less certain chapter for the royal family after the queen's record-breaking 70-year reign.Read here.
Sep 08, 2022 23:21 (IST)
PM Modi pays his tribute to Queen Elizabeth.
Sep 08, 2022 23:20 (IST)

Her Majesty Queen Elizabeth II will be remembered as a stalwart of our times. She provided inspiring leadership to her nation and people. She personified dignity and decency in public life. Pained by her demise. My thoughts are with her family and people of UK in this sad hour.

The Queen died peacefully at Balmoral this afternoon.

The King and The Queen Consort will remain at Balmoral this evening and will return to London tomorrow. pic.twitter.com/VfxpXro22W

Sep 08, 2022 20:34 (IST)
Plane Carrying Royal Household Members In Aberdeen
The plane that has landed in Aberdeen is carrying the Duke of Cambridge, the Duke of York and the Earl and Countess of Wessex, reports BBC.
Sep 08, 2022 20:30 (IST)
Plane Carrying Royal Household Members Lands In Aberdeen
A plane carrying seven members of the Royal Family has landed at Aberdeen airport.
It's not known who exactly is on the flight from RAF Northolt.
Aberdeen airport is about an hour's drive from Balmoral.
Sep 08, 2022 20:08 (IST)
Queen Elizabeth II has been dogged by health problems since spending a night in hospital last October. Read here.
Sep 08, 2022 19:31 (IST)

Sep 08, 2022 19:24 (IST)
Royal Family Gather As Queen Elizabeth's Doctors Express Concerns Over Health
Queen Elizabeth II's closest family travelled to join the 96-year-old monarch on Thursday after doctors placed her under medical supervision, prompting concern from British political and religious leaders, AFP reported.
Britain's longest-serving monarch has been dogged by health problems since last October that have left her struggling to walk and stand.
All her children -- heir to the throne Prince Charles, 73, Princess Anne, 72, Prince Andrew, 62, and Prince Edward, 58, were either at or heading to join her at the Balmoral royal estate in Scotland, aides said.
Also heading to Balmoral was Charles's elder son Prince William along with his younger son Prince Harry and his wife, Meghan, who have been on a rare visit to Britain after abandoning royal life to move to the United States.
Sep 08, 2022 19:19 (IST)
Prince Charles, the heir to the British throne, is now with Queen Elizabeth after she was placed under medical supervision, the BBC reported on Thursday. Read here.
Sep 08, 2022 19:16 (IST)

Sep 08, 2022 19:14 (IST)
Fears grew on Thursday for Queen Elizabeth II after Buckingham Palace said her doctors were "concerned" for her health and recommended that she remain under medical supervision. Read here.