Vladimir Putin was sworn in as Russia's president for a historic fourth term at a ceremony in the Kremlin, extending his rule by another six years. 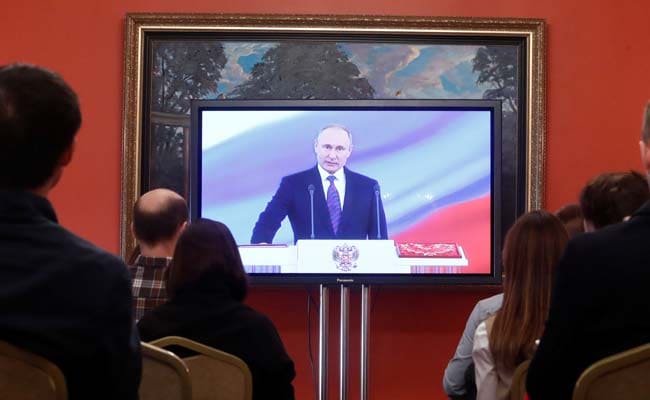 Moscow, Russia: Vladimir Putin was sworn in as Russia's president for a historic fourth term at a ceremony in the Kremlin on Monday, extending his almost two-decade rule by another six years.

"I consider it my duty and my life's aim to do everything possible for Russia, for its present and for its future," Putin said, with his hand on the Russian constitution.

Vladimir Putin inaugurated his fourth Kremlin term under the shadow of hugely strained ties with the West and a crackdown on the opposition.

Putin, who has ruled Russia for 18 years, will begin his next stint as leader two days after nearly 1,600 protesters including opposition leader Alexei Navalny were detained during nationwide rallies against him, with the European Union condemning "police brutality and mass arrests".

The Russian president used his last term to annex Crimea from Ukraine in 2014 and launch a military campaign in Syria on the side of Bashar al-Assad the following year and has promised to improve living standards at home during his next term.

But he has remained silent on the issue of his succession -- despite this being an inevitable concern as the constitution bars him from running again when his fourth term ends in 2024.

Putin has struggled to revive an economy that crashed after Moscow was hit with Western sanctions over its annexation of Crimea in 2014, followed by a fall in global oil prices in 2016.

Despite this, his victory in the March election was never in question and the prospect of an inauguration in the Kremlin's gilded Andreyevsky hall has generated little excitement.

This year Putin's minders are reportedly planning a fairly low-key inauguration ceremony that will not include a lavish Kremlin reception in an apparent effort to eschew any bad publicity.

In 2012, Putin's black cortege raced through the deserted Moscow streets on its way to his third Kremlin inauguration, in what many saw as a major faux pas.

This time Putin is only expected to meet volunteers who took part in his election campaign.

Protest leader Navalny, who was barred from challenging Putin in the March election, had called on Russians to stage a day of rallies across the country on Saturday under the catchy slogan "Not our Tsar".

In a new development that shocked many, police in Moscow were helped by pro-Putin activists dressed as Cossacks, a paramilitary class who served as tsarist cavalrymen in imperial Russia.

Amnesty International said its representatives saw the "Cossacks" pummel protesters with whips and fists as police looked on.

Tatyana Stanovaya, a Paris-based analyst for the Centre of Political Technologies in Moscow, said that with the crackdown on the opposition the Kremlin wanted to show it would brook no dissent under Putin's new term.

"The Kremlin wants to draw a red line which cannot be crossed," Stanovaya told AFP.

Observers expressed fears that the detentions could lead to a new wave of criminal cases after similar rallies in 2012 against Putin's return to the Kremlin from the post of prime minister led to a huge crackdown on the protest movement.

Criminal charges were brought against around 30 demonstrators and many of them were sentenced to prison terms of between 2.5 years and 4.5 years.

A major crackdown on dissent ensued, with authorities introducing a raft of measures to bolster control over the internet.

In a sign this trend would continue into Putin's fourth term, last month the state telecoms watchdog tried to block popular messaging app Telegram and said Facebook could be next.

Political analysts said that Moscow's attitude towards the West -- which has only hardened over the crises in Ukraine and Syria, as well as accusations of spy poisoning in the UK and election meddling in the US -- was also unlikely to change under Putin 4.0.

"For Putin any concession is a sign of weakness, so there shouldn't be any expectation of a change in foreign policy," said Konstantin Kalachev, the head of the Political Expert Group think tank in Moscow.

"Also, foreign policies are one of the main foundations of his support within the country. Putin needs to guarantee national unity, and for this he needs an enemy."

'Take everyone by surprise'

But Independent political analyst Dmitry Oreshkin said the president's approach to the international community would have to shift over the next term.

"Russia hasn't been so isolated since the Soviet war in Afghanistan," he told AFP, referring to the 1979-1989 conflict.

"Now his task isn't to bring any new lands to Russia, but to force the world to consider Russia's interests and accept its previous conquests."

Reports that Alexei Kudrin -- a liberal former finance minister who is respected abroad -- could return to the Kremlin in a reshuffle, suggest the president could be seeking a less confrontational approach.

Oreshkin said Putin would stay on for the full term to carry out this task but Kalachev suggested the president could leave the Kremlin before he serves out the six years.

"He will stay in power, but not necessarily in the presidency," he said.

Promoted
Listen to the latest songs, only on JioSaavn.com
"For Putin to write his place in history, he needs to pick the right moment to go. Serving another six years is a road to nowhere. He will leave in a way that takes everyone by surprise."