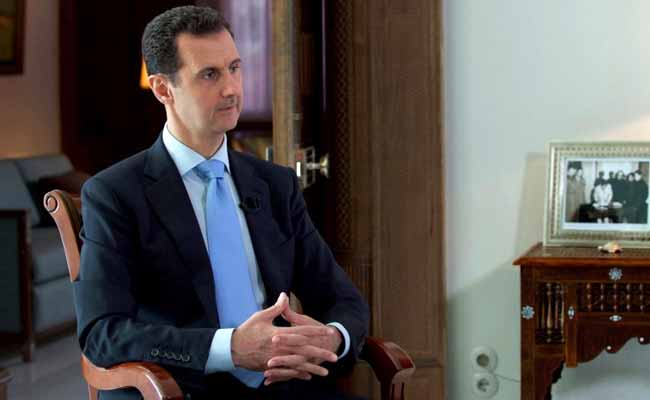 Russia pressed on with bombing in support of its ally President Bashar al-Assad. (File Photo)

MUNICH/AMMAN: Major powers agreed on Friday to a pause in combat in Syria, but Russia pressed on with bombing in support of its ally President Bashar al-Assad, who vowed to fight until he regained full control of the country.

Although billed as a potential breakthrough, the "cessation of hostilities" agreement does not take effect for a week, at a time when Assad's government is poised to win its biggest victory of the war with the backing of Russian air power.

If implemented, the deal hammered out during five hours of late night talks in Munich would allow humanitarian aid to reach besieged towns. It was described by the countries that took part as a rare diplomatic success in a conflict that has fractured the Middle East, killed at least 250,000 people, made 11 million homeless and sent hundreds of thousands fleeing into Europe.

But several Western countries said there was no hope for progress without a halt to the Russian bombing, which has decisively turned the balance of power in favour of Assad.

US Secretary of State John Kerry said that if the peace plan fails, more foreign troops could enter the conflict.

"If the Assad regime does not live up to its responsibilities and if the Iranians and the Russians do not hold Assad to the promises that they have made ... then the international community obviously is not going to sit there like fools and watch this. There will be an increase of activity to put greater pressure on them," Kerry, who was in Munich, told Dubai-based Orient TV.

"There is a possibility there will be additional ground troops."

US President Barack Obama has ruled out sending US ground troops to Syria, but Saudi Arabia this month offered ground forces to fight ISIS.

A White House spokesman, Eric Schultz, called the agreement "an important step," but added, "In the coming days, we will be looking for actions, not words, to demonstrate that all parties are prepared to honour their commitments."

The complex, multi-sided civil war in Syria, raging since 2011, has drawn in most regional and global powers, producing the world's worst humanitarian emergency and attracting jihadist recruits from around the world.

Rebels said the town of Tal Rifaat in northern Aleppo province was the target of intensive bombing by Russian planes on Friday morning. The British-based Syrian Observatory for Human Rights, a monitoring body, said warplanes believed to be Russian also attacked towns in northern Homs.

The news agency AFP quoted Assad as saying he would continue to fight terrorism while talks took place. He said he would retake the entire country, although this could take a long time.

Another week of fighting would give Syria's government and its Russian, Lebanese and Iranian allies time to press on with the encirclement of Aleppo, Syria's biggest city before the war, which they are now on the verge of capturing.

They are also close to sealing the Turkish border, a lifeline of rebel territory for years.

Those two victories would reverse years of insurgent gains, effectively ending the rebels' hopes of dislodging Assad through force, the cause they have fought for since 2011 with the encouragement of Arab states, Turkey and the West.

The cessation of hostilities agreement falls short of a formal ceasefire, since it was not signed by the main warring parties, the opposition and government forces.

Two Syrian rebel commanders told Reuters they had been sent "excellent quantities" of ground-to-ground Grad missiles with a range of 20 km (12 miles) by foreign backers in recent days to help confront the Russian-backed offensive.

Foreign opponents of Assad including Saudi Arabia and Turkey have been supplying vetted rebel groups with weapons via a Turkey-based operations centre. Some of the vetted groups have received military training overseen by the US Central Intelligence Agency.

Russia suggested it might not stop its air strikes, even when the cessation of hostilities takes effect in a week.

Foreign Minister Sergei Lavrov said Russia would not stop bombing fighters from ISIS and a rebel group called the Nusra Front, which is affiliated with al Qaeda, neither of which were covered by the cessation deal. "Our airspace forces will continue working against these organisations," he said.

Moscow has always said that those two jihadist groups are the principal targets of its air campaign. Western countries say Russia, in fact, has been attacking mostly other insurgent groups. Turkey's foreign minister said on Friday Russia was targeting schools and hospitals in Syria.

NATO Secretary General Jens Stoltenberg said Moscow must halt strikes on insurgents other than ISIS for any peace deal to work.

Britain and France said a peace deal could be reached only if Russia stops bombing insurgents other than ISIS.

The United States has been leading its own air campaign against ISIS fighters since 2014. US Defense Secretary Ash Carter said on Friday he expected Saudi Arabia and the United Arab Emirates to send commandos to help recapture ISIS's eastern Syrian stronghold, Raqqa.

Assad said he believed Saudi Arabia and Turkey were planning to invade his country. Russia has said Saudi ground troops would make the war last forever.

Saudi Arabia's foreign minister, Adel al-Jubeir, said in an interview published on Saturday that Russia's military interventions will not help Assad stay in power. "There will be no Bashar al-Assad in the future," al-Jubeir told a German newspaper.

Kerry had entered the Munich talks pushing for a rapid halt to fighting, with Western officials saying Moscow was holding out for a delay.

The tactic of agreeing to a break in hostilities while battling for gains on the ground is one Moscow's allies used in eastern Ukraine only a year ago. A ceasefire there eventually took hold, but only after Russian-backed separatists overran a besieged town after the deal was reached.

Diplomats from countries backing the plan met on Friday to discuss sending urgent humanitarian aid. "Convoys can go very soon if and when we have the permission and the green light from the parties," said Jan Egeland, head of the Norwegian Refugee Council, who chaired the meeting in Geneva.
© Thomson Reuters 2016