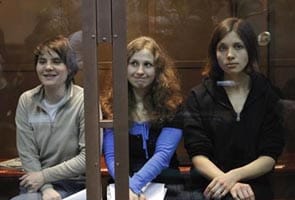 Moscow: Two women from punk band Pussy Riot sentenced to jail for an anti-Putin protest in a Moscow cathedral face harsh, Soviet-style prison camps where their lives may be in danger due to a lack of medicine and no hot water amid sub-zero winter temperatures, according to a recently released band member.

Pussy Riot's protest has attracted global attention because of the two-year jail sentences meted out to its members for what prosecutors called "hooliganism motivated by religious hatred".

Opposition figures say the punishments formed part of a wave of repression against opponents of President Vladimir Putin, now in his 13th year ruling Russia.

Putin said last Thursday that the women "deserved what they got" because their punk prayer in Moscow's main cathedral last February, during which the balaclava-clad women appealed to the Virgin Mary to get rid of the president, amounted to "group sex" and threatened the moral foundations of Russia.

Yekaterina Samutsevich, the third member of Pussy Riot who was released from jail earlier this month after her sentence was suspended on appeal, spoke to Reuters in an interview about the prison camp in Mordovia, about 300 miles (500 km) southeast of Moscow where her colleague Nadezhda Tolokonnikova has been sent to serve her sentence.

She said its conditions recalled the Soviet era.

"There is no hot water in Mordovia and there are only special prison clothes given out which are very cold for the weather," said Samutsevich.

"There is no medicine. In Soviet times they thought that if people fell ill, that was their own problem ... if someone gets sick and nobody helps them, they can die - unfortunately there have been such cases and they happen periodically."

The other jailed group member, Maria Alyokhina, is bound for a prison camp in the Urals city of Perm, a location used to jail political prisoners in the Soviet era. She has not yet arrived.

Samutsevich, a small, intense 30-year-old who has worked as a computer programmer, gave the interview in a small McDonald's in a town just outside Moscow because of concerns about her security.

The first part of the interview was filmed and took place outside in a howling cold wind because the restaurant would not allow TV cameras inside.

Samutsevich predicted that Putin's government would in the end fall victim to mass unrest and said the clampdown on dissent now under way in Russia showed just how scared the Kremlin was.

"The system itself is crumbling," she said. "It's becoming more repressive ... those in power have very strong fears and their behaviour is more and more wild. We could end with a total collapse like the Soviet Union."

Putin is now starting a fresh six-year term, having won a presidential election in March with 63.6 percent of the vote. Opponents said the Kremlin's dominance over mass media, obstacles placed in the way of the opposition, ballot-stuffing and the extensive use of government resources to garner support for Putin meant the vote was not free or fair.

Samutsevich said Pussy Riot's top priority now was to campaign to free the band's two imprisoned members and it would call on other members for help.

"The band doesn't consist just of the three of us," she said. "There's more, way more people, around 20 members in the band."

Putin, she said, was trying to present the sentences against the band members as "some kind of ordinary court case for an ordinary criminal charge. But this is totally wrong and he is not succeeding".

Polls have shown that in Russia's predominantly conservative society, where Orthodox Christian believers are a majority, most citizens approve of the jail terms for Pussy Riot and dislike their actions. More than 40 percent in a recent poll said the women's prison terms should have been longer.

Asked about popular hostility to the band, Samutsevich said the Kremlin had used its control of state television channels to present a distorted picture of Pussy Riot.

This obscured the band's real purpose and its political protest message. Instead, official media emphasised constantly that the group were anti-religious blasphemers.

Viewers, she said, "didn't see us, they didn't hear us because the federal TV channels have done their best to cut out our speech. They would cut all the episodes from the video (of Pussy Riot performing in the cathedral) where you could hear the lyrics of the songs. And when people hear the lyrics, they immediately understand the purpose of our action."

Promoted
Listen to the latest songs, only on JioSaavn.com
Opposition figures have pointed to the irony of Putin, a former KGB spy, speaking solemnly of the sanctity of religion in a country where, for decades, the Soviet Communist Party - which the Kremlin chief served for decades in his KGB role - repressed all forms of religious expression.