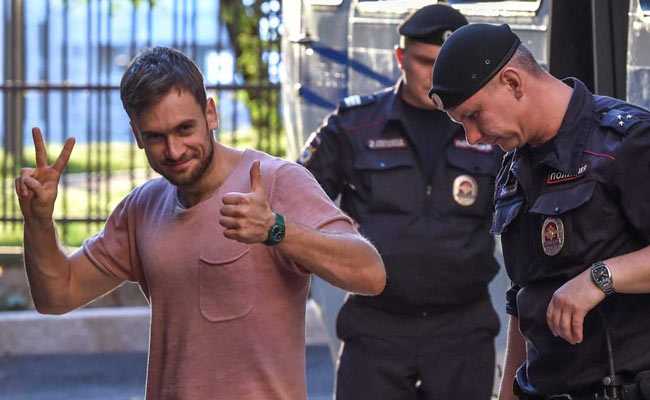 A Pussy Riot activist who took part in a pitch invasion during the 2018 World Cup has been hospitalised suffering from apparent poisoning from medical drugs, his partner told Russian media Friday.

Pyotr Verzilov, who has both Canadian and Russian citizenship, was admitted to hospital following a court hearing on Tuesday unable to speak and recognise people, his girlfriend Veronika Nikulshina, also a Pussy Riot member, told local media.

The Moscow trauma hospital where Verzilov is being treated told RIA Novosti state news agency on Friday he remains in intensive care in a "serious condition".

There has so far been no official statement on the cause of his condition.

Nikulshina told Meduza early Friday that Verzilov, 30, had apparently suffered poisoning from a large amount of a type of medication.

"It's definitely poisoning, poisoning with anti-cholinergic drugs," Nikulshina said. "This is a question of a large dose."

Such drugs are used to treat a range of medical issues including lung conditions. Verzilov's relatives have told media that he was not taking any medications.

Verzilov served a 15-day jail sentences along with Nikulshina and other Pussy Riot members for running onto the pitch during the July 15 World Cup final in a protest they said was aimed at highlighting abuses by Russian police.

Verzilov's sudden illness has been compared by Russian media to the case of Kremlin opponent and rights activist Vladimir Kara-Murza who fell ill in 2015 and was diagnosed with acute kidney failure in connection with poisoning.

He was found to have very high levels of heavy metals in his blood. Last year he once again fell into a coma, which his family said could be a result of the 2015 incident, and went abroad for treatment.

Kara-Murza was deeply involved in lobbying in the United States for the expansion of the Magnitsky Act imposing sanctions on Russian officials.