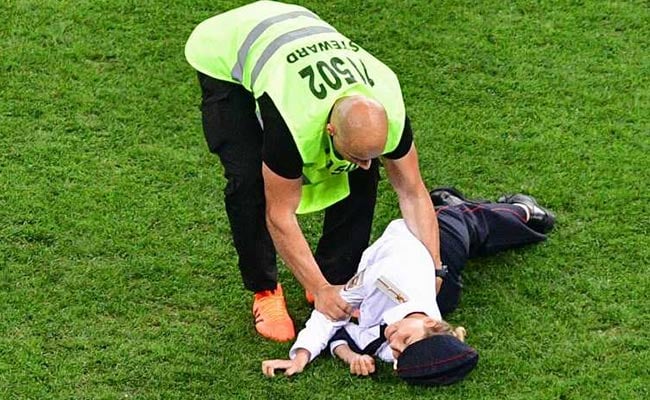 An activist from the Russian protest group Pussy Riot who staged a pitch invasion during the 2018 football World Cup final in Moscow has been hospitalised with suspected poisoning, members of the punk collective said Thursday.

"His eyesight was going... First we dismissed it as fatigue but then it got worse and he lost the power of speech," Nikulshina told Ekho Moskvy radio. "He didn't recognise me anymore, he didn't react to requests.

She added, pending the results of medical tests: "I am not ruling out the possibility that it could be connected to outside interference."

Nikulshina said the activist had never suffered from such problems before. In another interview she said he told doctors he had not taken drugs.

Verzilov is also a publisher at the independent news site Mediazona, which focuses on the Russian prison system.

Nikulshina and Verzilov served a 15-day jail sentence along with two other Pussy Riot members for running onto the pitch during the July 15 World Cup final in a protest they said was aimed at highlighting abuses by Russian police.

He was present in court on Tuesday when two other Pussy Riot members, including Nikulshina, were sentenced on charges of disobeying a police officer, Russian media reported.

Nikulshina received two days in jail but was released on time served.

"Our friend, brother, comrade Petr Verzilov is in reanimation. His life is in danger. We think that he was poisoned," Pussy Riot wrote on its official Twitter account with a link to an article about the hospitalisation.

Pussy Riot drew international attention in 2012 when it staged a protest in a Moscow church. Two members served jail terms, while another was given a suspended sentence.