Protests After Nepal Rejects Proposal to Declare Itself a Hindu Nation 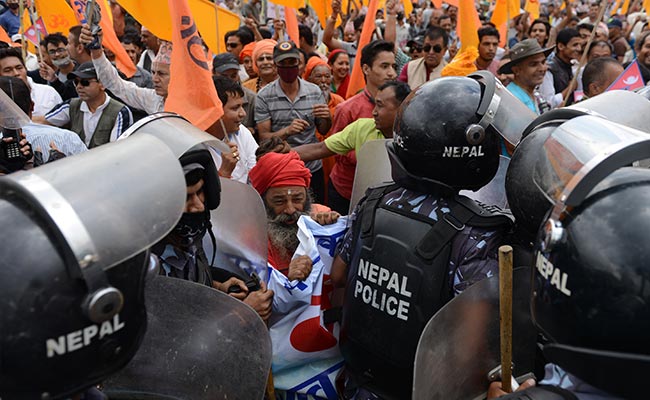 Police try to stop pro-Hindu activists during a protest demanding Nepal be declared a Hindu state in Kathmandu. (Agence France-Presse)

As the Constituent Assembly resumed voting on individual articles of the Constitution draft, more than two-thirds of the lawmakers rejected the amendment proposal to make Nepal a Hindu state and reaffirmed that it will remain a secular nation.

The proposal was made by Rastirya Prajatantra Party Nepal or National Democratic Party Nepal which demanded that secularism be removed from the Constitution in the Article 4 and Hindu state be mentioned instead.

Mr Thapa's proposal for a vote received the support of only 21 lawmakers in the 601-seat Constituent Assembly. As the CA Rules requires 61 persons to begin the split voting, the voting was not done.

An erstwhile Hindu state, Nepal was declared a secular state in 2007 after the success of the People's Movement of 2006.

During a public opinion collection held in July, majority of the people preferred the word 'Hindu' or 'religious freedom' instead of using the term 'secularism'.

Protesting the rejection of the proposal, a group of Hindu activists carrying yellow and saffron flags clashed with security personnel at New Baneshwar area in the capital.

The clash erupted after police used force to disperse the agitating activists who tried to enter the prohibitory area near the Constituent Assembly building.

They wanted to march towards the Assembly, demanding that Nepal be acknowledged as Hindu state in the new constitution. The protesters attacked passing vehicles, including one of the United Nations.

Nepal yesterday entered the final phase of promulgating its new Constitution with the three major parties going ahead with clause-wise voting on the final draft of the statute despite a boycott by Madhesi parties and violent protests that have claimed nearly 40 lives.

The Madhesi parties are protesting against the seven province model of the federal structure as proposed by the major political parties.