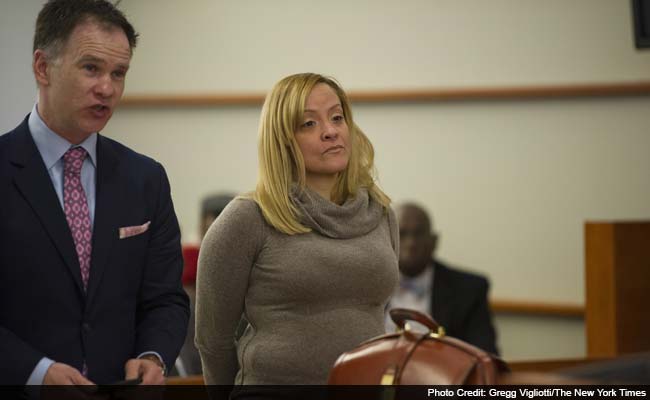 Liana Barrientos is arraigned on fraud charges at a State Supreme Court in New York, April 10, 2015.

Liana Barrientos, a woman who had 10 husbands, admitted that she wed one man in return for cash and helping him get citizenship, prosecutors said Friday in a Bronx courtroom.

Most of her husbands immediately applied for citizenship and some, when denied, divorced her and refiled with different wives, prosecutors said.

And one husband, from Pakistan, was later deported in connection with terrorism threats against the United States, the authorities said.

Barrientos is still married to him - and to three other men, a prosecutor said.

The details behind Barrientos' marriages and choice of husbands began trickling out Friday as she was arraigned on fraud charges in state Supreme Court. Barrientos, 39, pleaded not guilty and stood tight-faced beside her lawyer, Christopher Wright, as an assistant district attorney, Jessica Lupo, described her case.

"The concern here," Lupo said, "is that these men are individuals from 'red flag' countries such as Egypt, Turkey, Georgia and Pakistan." Immigration attempts from countries so described are under heightened scrutiny because of possible links to terrorism.

Barrientos' lawyer did not speak to reporters after the hearing. None of her husbands appeared in court.

Barrientos married nine of the 10 men between 1999 and 2002. She is charged with fraud only in the case of her 10th husband, whom she married in the Bronx in 2010. She wrote on her marriage license that she had not previously been married, prosecutors say. She faces up to four years in prison.

A spokesman for the federal Department of Homeland Security said Barrientos came to the department's attention after agents with the U.S. Citizenship and Immigration Services "spotted irregularities" in immigration cases connected to her.

A spokeswoman for the citizenship agency, Katie Kaplan, declined to discuss Barrientos' case but said, "There are a number of ways we can stumble upon something that looks not quite right."

Lupo, the prosecutor, said that when first questioned, Barrientos said her only husband was her most recent one, an immigrant from Mali.

Last fall, Lupo said, Barrientos was confronted with a pile of marriage licenses by Homeland Security investigators and conceded that she had married one other man, from the former Soviet republic of Georgia.

"She admitted going to an interview with him and giving him pictures as well as other documentation, and receiving money for those actions," Lupo said.

Barrientos got a "couple of thousand" dollars, a spokesman for the Department of Homeland Security said.

The Georgian, Vakhtang Dzneladze, was actually the seventh man Barrientos had married in New York state. He got his citizenship in 2006 and divorced her in 2007, Lupo said.

Barrientos' eighth husband, Rashid Rajput, was deported in 2006 after a federal investigation "regarding making threatening statements toward the U.S.," Lupo said.

The authorities would not say if the other nine husbands have faced legal trouble.

Barrientos was released without bail, and is due back in court May 18. She declined to speak to reporters as she left the courthouse.

Two hours after leaving court and about 15 blocks away, Barrientos was arrested on charges of entering the subway system without paying.

She and a 19-year-old relative, Tracy Barrientos, walked through an open emergency gate at the 149th Street-Grand Concourse station, said Officer Sophia Mason, a police spokeswoman.