Making his first royal engagement just three days after the birth of his "dream" first son with wife Meghan, Harry travelled to the Netherlands to launch the countdown to the games. 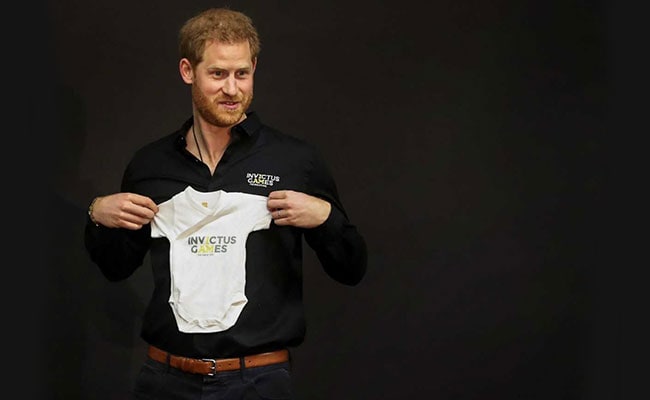 Prince Harry back to work within three days after son Archie Harrison's birth.

Britain's Prince Harry received an Invictus Games romper suit for his newborn son Archie on Thursday as he marked one year until The Hague hosts the sports championship for wounded soldiers.

Making his first royal engagement just three days after the birth of his "dream" first son with wife Meghan, Harry travelled to the Netherlands to launch the countdown to the games.

Harry pulled a face and pretended to model the tiny white garment with a grey and yellow "Invictus Games" logo after he was handed it by Princess Margriet of the Netherlands.

The Duke of Sussex joked that he should "put it on" himself, before thanking the Dutch princess.

The prince, who showed off Archie with Meghan to the public for the first time on Wednesday, also met athletes and took part in sporting activities including archery.

The Olympic-style Invictus Games are the brainchild of Harry, who served with the British military in Afghanistan -- but they have also been a recurring theme in Harry and Meghan's relationship.

It was at the 2017 event in Toronto that he made his first appearance with the American former actress, while their attendance at the 2018 Sydney edition came days after they first announced her pregnancy.

Founded by Harry in 2014, the Games are an international sporting event for wounded, injured and ill servicemen and women, both active duty and veterans.

The prince has previously spoken of how he was profoundly moved by witnessing death and life-changing injuries while on deployment in Afghanistan, coupled with the grief and sadness that went with it.

(Except for the headline, this story has not been edited by NDTV staff and is published from a syndicated feed.)
Comments
Prince Harry baby boyPrince harryInvictus Games