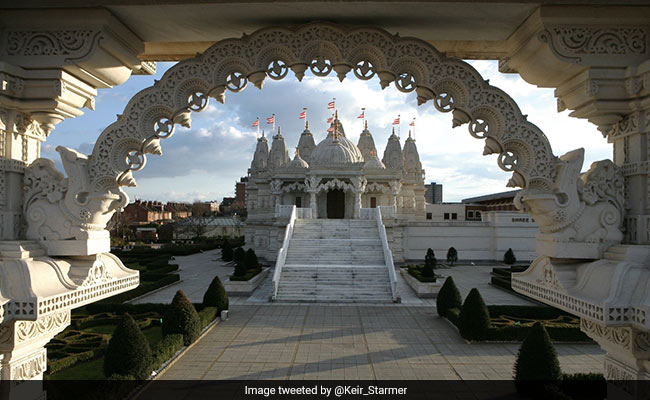 Londons Neasden Temple began taking shape in July 1991 and opened its doors to visitors in August 1995.

Popularly called the Neasden Temple was built as per the specifications in ancient Indian scriptures but also satisfies modern British building regulations. It prides itself as a "made in India, built in London" grand monument and is among the largest Hindu temples outside the country.

In his special video message, heir to the British throne Prince Charles, who has made four visits to the temple on Holi and Diwali over the years, reflected on its role not only as a place of worship, but also as one of cultural and religious learning, celebration, peace and community service.

On the 25th anniversary of @NeasdenTemple, The Prince of Wales has sent a message praising the British Hindu community for the way they have worked together during the pandemic. #NeasdenTemple25pic.twitter.com/WZUedTIOvQ

— The Prince of Wales and The Duchess of Cornwall (@ClarenceHouse) August 20, 2020

"I have also been struck by the very special beauty and craftsmanship of the building," added the 71-year-old British royal.

The temple describes itself as a "humble tribute to the inexpressible beauty, majesty and glory of the Divine" and involved over 3,000 volunteers in its creation.

It is made of 5,000 tonnes of the Italian Carrara marble, Indian Ambaji marble and fine Bulgarian limestone. Its interiors of the haveli-style structure were entirely hand-carved in India by 169 craftsmen and then shipped to London for assembly.

Over the years, it has welcomed several dignitaries from around the world, including UK Prime Minister Boris Johnson ahead of his election in December 2019 and Prime Minister Modi, when he was the chief minister of Gujarat.

The Temple is a proud British landmark and one of the greatest gifts that the Hindu community has given to the UK.” – PM @BorisJohnson
#LM25#NeasdenTemple25pic.twitter.com/11U4NW21Sx

Recalling his visit to the temple PM Modi wrote: "Neasden Temple marks its silver jubilee. The Temple has been at the forefront of many community service initiatives. It has brought people together and inspired them to work for humanity."

Neasden Temple marks it's silver jubilee. The Temple has been at the forefront of many community service initiatives. It has brought people together and inspired them to work for humanity.

When I was Gujarat CM, I had the honour of visiting the Temple. #Neasdentemple25#LM25pic.twitter.com/SsFzI2oUJP

The silver jubilee celebrations involve musical tributes and prayers, which will conclude this weekend with a Vishwa Shanti Mahapuja to be webcast live on Sunday.

"The mahapuja will also provide an opportunity for thousands across the UK, Europe and the rest of the world to pray for those affected by the global Covid-19 pandemic," a temple spokesperson said.