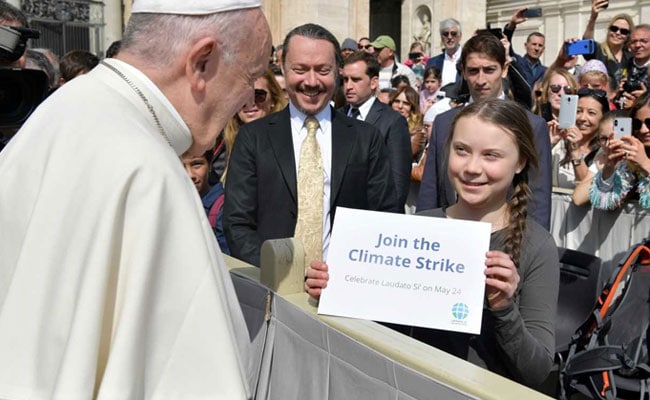 Thank you for standing up for the climate and speaking the truth, Greta Thunberg told Pope

Teenage environmental activist Greta Thunberg brought her campaign to the Vatican on Wednesday and met Pope Francis, who sees eye-to-eye with her on the dangers of climate change.

The Swede, 16, sat in the front row at the pope's general audience in St. Peter's Square and when he greeted her, she held up a small sign reading "Join the Climate Strike".

"Thank you for standing up for the climate and speaking the truth. It means a lot," she told him.

"God bless you, continue to work, continue. Go along, go ahead," he responded. 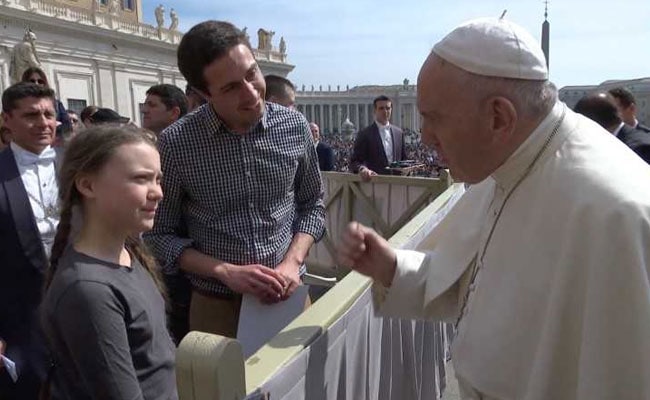 Ms Thunberg, who has inspired a movement of children against global warming, chatted with the pope briefly through an interpreter.

She was preaching to the converted - Pope Francis wrote a document in 2015 on protection of the environment from global warming.

In an encyclical, called "Laudato Si (Praise Be), On the Care of Our Common Home," he advocated a change of lifestyle in rich countries steeped in a "throwaway" consumer culture and an end to putting profit before the common good.

Since then, Pope Francis has called for a reduction in the use of fossil fuels at every occasion.

At a meeting with oil executives last year, Francis said the world must convert to clean fuel, telling them: "Civilization requires energy but energy use must not destroy civilization".

Thunberg shot to prominence last August, taking a place on the cobblestones in front of Stockholm's Parliament House with her "school strike for climate" sign.

Thousands of students around the world have since copied her and youth organisations have launched school strikes involving students in more than 40 countries. She is due to address Italian senators on Thursday and lead a student strike on Friday.

On Tuesday in Strasbourg, she urged European leaders to act to save the planet in the way they are pledging to rebuild Notre-Dame after fire gutted the cathedral in Paris.