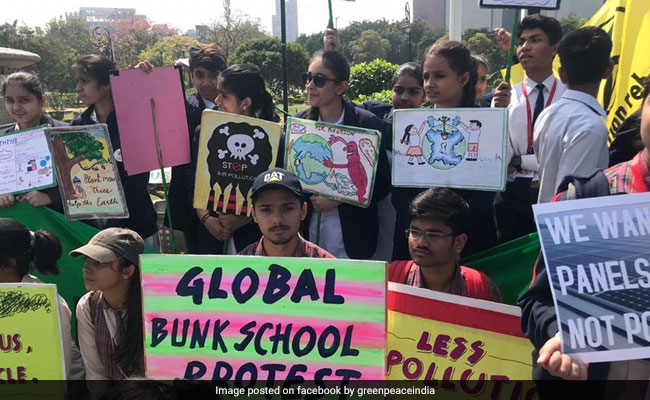 The global 'Fridays for Future' protest against climate change today found its way to India, as students from Delhi and Gurgaon skipped school to demand action over climate change. The movement, started by 16-year-old Swede Greta Thunberg, has seen students around the world skip school and take to the streets in protest of inaction over climate change and environmental degradation. Today, as the "Fridays for Future" movement planned a coordinated global strike, students from Delhi NCR also joined the movement in support of the cause.

"We are joining #climatestrike from Delhi... We demand clean air, water and soils for our safe future. #fridayforfuture," wrote Greenpeace, sharing a photograph which shows a row of students in their uniforms, holding placards with slogans against air pollution.

नमस्कार we are joining #climatestrike from Delhi. Breathing is killing us. We demand clean air, water and soils for our safe future. #fridayforfuture

Another picture shows the site of Greenpeace's 'Extinction Rebellion' in Gurgaon. Extinction Rebellion is a movement that aims to avert climate breakdown and halt the loss of biodiversity. The site, a park in Gurgaon, features plastic installations to show how much plastic we consume.

Our #ExtinctionRebellion site today is a park with #Plastic installations to show how much plastic we consume. #Fridays4Future

"That's a glimpse from Gurgaon, the world's most polluted city where children have come together for #Fridays4Future," wrote Greenpeace, posting a pic which shows students wearing anti-pollution masks.

That's a glimpse from Gurgaon, the worlds most polluted city where children have come together for #Fridays4Future

Hello from Gurgaon!! We're doing our bit for #Fridays4Future with the #extinctionrebellion !

They also posted pics of the students on strike in Hyderabad.

The 'Fridays for Future' movement began in August, when Greta Thunberg stopped going to school every Friday and instead protested in front of the Swedish Parliament to demand more effective measures against climate change. Since then, tens of thousands of school and university students have held demonstrations in protest against climate change, and the movement has spread to more than a dozen countries, including USA, Japan, Germany, France, UK and more.