Greta Thunberg began a solo protest in Sweden in August but has since inspired students around the globe. Strikes seeking global action against climate change are expected in 1,659 towns and cities in 105 countries on Friday, involving hundreds of thousands of young people, the Guardian reported. 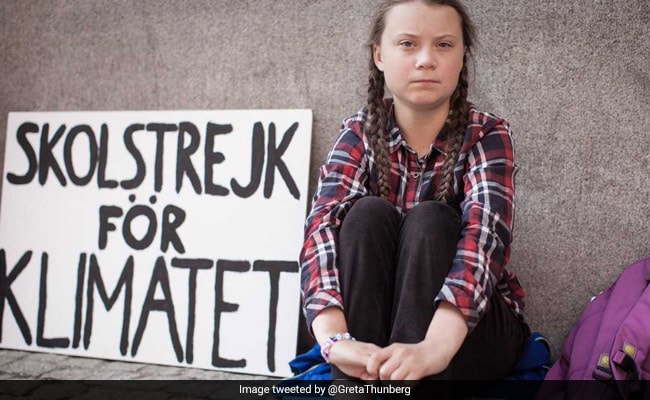 Greta Thunberg had challenged leaders in person at the UN climate summit in late 2018.

Greta Thunberg, a 16-year-old Swedish activist, who is a prominent voice in the fight against climate change, has been nominated for the Nobel Peace Prize this year.

Thunberg began a solo protest in Sweden in August but has since inspired students around the globe. Strikes seeking global action against climate change are expected in 1,659 towns and cities in 105 countries on Friday, involving hundreds of thousands of young people, the Guardian reported.

"We have proposed Greta Thunberg because if we do nothing to halt climate change it will be the cause of wars, conflict and refugees," said Norwegian Socialist MP Freddy Andre Ovstegard.

Greta Thunberg, in August last year, became the face of a 'school strike' outside the Swedish parliament building. She has asked world leaders not to ignore the impending consequences of runaway climate change. One of the leaders the young girl mentioned in a message to digital video publisher Brut India was Prime Minister Narendra Modi.

"Greta Thunberg has launched a mass movement which I see as a major contribution to peace."

"(I am) honoured and very grateful for this nomination," said Thunberg on Twitter. Tomorrow we #schoolstrike for our future. And we will continue to do so for as long as it takes."

She had already challenged leaders in person at the UN climate summit in late 2018 and at Davos in January. "Change is coming whether they like it or not," she said.

National politicians and some university professors can nominate candidates for the Nobel Peace Prize. This year's prize has 304 candidates, of which 219 are individuals and 85 organisations, the Norwegian Nobel Committee reported last month.

Last year, Thunberg stopped going to school every Friday and instead protested in front of the Swedish Parliament to demand more effective measures against climate change.

After her speeches at the UN climate change conference in Poland and at the Davos forum, she became an example for many young people all over the world, who since have promoted similar initiatives.

Pakistani activist Malala Yousafzai in 2014 became the youngest winner of the prize, at the age of 17.

The Nobel prizes are awarded each year on December 10, coinciding with the anniversary of the death of its founder Alfred Nobel, in a double ceremony: At the Oslo City Hall in Norway, for the Peace Prize, and in the Konserthus in Stockholm, Sweden, for the other five awards.

The Nobel Peace Prize last year went to Congo's Denis Mukwege and Iraq's Nadia Murad for "their efforts to end the use of sexual violence as a weapon of war and armed conflict".