Pope Francis, who arrives in Dublin on Saturday for a two-day visit, will find an Ireland his predecessor would not have recognised as Catholic. 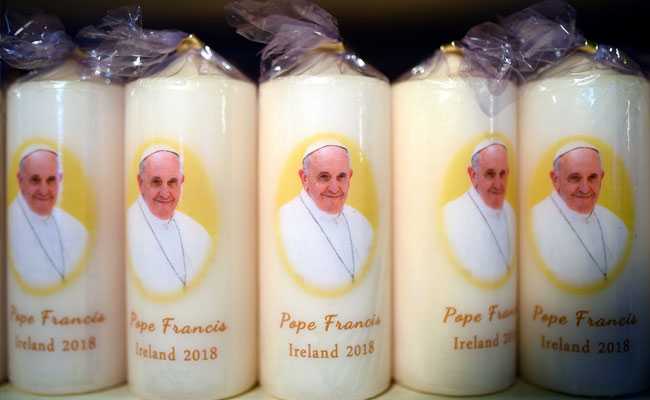 Pope Francis candles are seen for sale at a stall at the Pastoral Congress in Dublin, Ireland. (Reuters)

When Pope John Paul II made the first visit by a pontiff to Ireland in 1979, contraception and divorce were still illegal and the Catholic Church's influence on a deeply conservative society was near-total.

Pope Francis, who arrives in Dublin on Saturday for a two-day visit, will find an Ireland his predecessor would not have recognised as Catholic.

Ireland is now led by a gay prime minister. Three years ago, it became the world's first country to adopt gay marriage by popular ballot. Last May, it ended one of the West's strictest abortion regimes. Both referendums won by large majorities despite Church opposition.

And he will find a wounded Church whose once-absolute authority has been laid low by sexual abuse scandals.

Weekly Mass attendance was at about 80 percent 40 years ago. It's about 35 percent now, and last year only half of marriages were held in religious ceremonies in churches.

The rock that was once Irish Catholicism began crumbling in the late 1990s, with media investigations about the notorious Church-run, and government-backed, Magdalene Laundries, where "fallen women" were forced to work in slave-like conditions.

A series of official government inquiries between 2005 and 2014 exposed sexual abuse of minors by priests in various areas of Ireland. Church homes for unmarried mothers have been investigated for their treatment of children.

"When the pope arrives in Ireland this weekend, he will find a Catholic Church not just falling to ruin, but in some respects beyond repair," wrote Fintan O'Toole, a columnist for the Irish Times.

"He will be greeted with joy by the faithful, but few, even among them, will expect him to be able to fix an institution that has been shaken to its very foundations," he wrote.

A "Perfect Storm" of Abuses Crises

Francis could not be visiting Ireland at a worse time.

Recent sexual abuse crises in the United States, Chile, and Australia have reminded the Irish people of their scandals at home and fed escalating anger towards bishops who mishandled abuse cases.

One Vatican official called the combination "a perfect storm".

Last week, a grand jury in the U.S. state of Pennsylvania released the findings of the largest-ever investigation of sex abuse in the U.S. Church, finding that 301 priests in the state had sexually abused minors over the past 70 years.

The damning U.S. report has given Irish abuse victims and their advocates from around the world - some have flown into Dublin for the visit - fresh resolve to demand that the pope do more to root out sexual abuse in the Church.

"There are those who feel they can no longer trust our message, perhaps because they have been directly hurt and betrayed in their families by their experience of Church, or because the revelations of such heinous crimes have shocked them to the core," said Archbishop Eamon Martin, Ireland's most senior Church official.

The main purpose of the pope's trip is to close a week-long international Catholic gathering on the theme of the family that takes place every three years in a different city.

In one sign of just how much sexual abuse has cast a shadow on a meeting that was to have concentrated on family themes, Martin delivered the gathering's keynote address in place of Cardinal Donald Wuerl of Washington D.C., who withdrew after he was criticised in the Pennsylvania report.

Abuse victims, their families and supporters will gather in another part of Dublin while the pope says Mass on Sunday. Many of them have called on him to do more than just hold a private meeting with a select group of survivors.

A silent vigil will be held at the same time by locals in the western town of Tuam. Four years ago, an unmarked grave with the remains of hundreds of babies was found there, on the grounds of a former Church-run home for unwed mothers and their children, shocking the country once more.

One sign of the Church's waning influence, if any were needed, can be seen in Dublin's city centre, where street vendors like Marion White are struggling to sell papal flags and T-shirts made especially for the visit.

"I worked here for the pope in 1979 and the country was electrified. It was an amazing event. Everyone was so cheery and happy," said White, who has worked the stall near Dublin's main thoroughfare of O'Connell Street since he was nine-years old.

"It's all changed now, with all that has happened," he said. "There's a lot of controversy, and people are not afraid to say it to us."

(Except for the headline, this story has not been edited by NDTV staff and is published from a syndicated feed.)
Comments
Pope Francis Ireland visitChurch abuse scandal