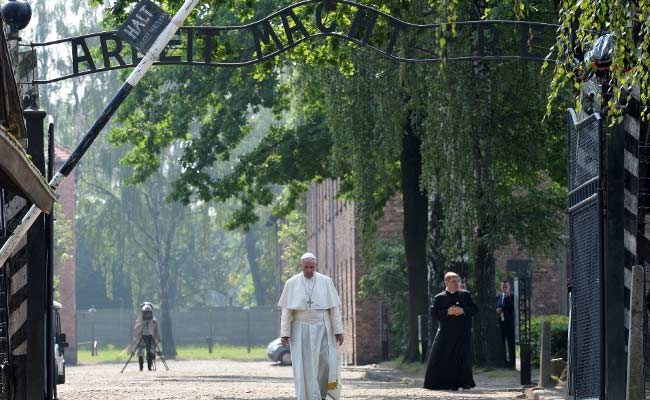 Pope Francis leaves through the entrance of the former Nazi death camp of Auschwitz. (AFP)

His head bowed, the pope prayed in silent contemplation before meeting Holocaust survivors -- some of whom he tenderly kissed -- in front of the death wall where the Nazis summarily executed thousands of people by firing squad.

Among the survivors he embraced were Helena Dunicz Niwinska, a 101-year-old woman who played the violin in the Auschwitz orchestra, as well as survivors who worked at the camp hospital or who were there as children.

"I wanted to kneel before him but he took me in his arms and kissed my two cheeks," she added.

Fellow survivor Alojzy Fros, who is 99, still remembered his arrival at the camp.

"Just after I arrived, through an open door I saw naked bodies piled up like logs about a metre high," he told AFP.

Francis lit a candle in front of the death wall, bowing his head in prayer before visiting the cell of Polish priest and saint Maximilian Kolbe who died at Auschwitz after taking the place of a condemned man.

The visit falls on the 75th anniversary of the day Kolbe was condemned to death.

The Argentine later lead prayers for the 1.1 million mostly-Jewish victims murdered at the camp as part of Nazi Germany's "Final Solution" of genocide against European Jews which claimed six million lives all told during World War II.

Writing in the memorial book, he wrote: "Lord, have mercy on your people. Lord, forgive so much cruelty. Francis at Auschwitz."

Ahead of his visit Francis said that rather than making a speech, he would stand in silence to reflect on the horrors committed and let his tears flow.

After arriving Wednesday in Poland -- the heartland of Nazi Germany's atrocities -- the pontiff said the world had been plunged into a piecemeal third world war.

He has repeatedly denounced those committing crimes in the name of religion, after Europe suffered a string of deadly jihadist attacks.

The pontiff has forged ever-closer ties between the Catholic Church and Jews since his election in 2013.

The pope then travelled the two miles (three kilometres) to Birkenau, the main extermination site, and was driven alongside the tracks which were laid in 1944 to allow trains of prisoners to be transported directly to the gas chambers and the crematoria.

Francis bowed his head in prayer at the ruins of one of the crematoria blown up by the Nazis as they evacuated the camp, as Poland's Chief Rabbi Michael Schudrich sang a Jewish prayer for the dead in Hebrew.

Ahead of the visit, Schudrich welcomed the pontiff's intention to remain silent during his visit to the camp, saying "often people go to Auschwitz... and they are silent (about the horrors) for the rest of their lives".

"Instead, once we leave Birkenau we must spend the rest of our lives screaming, yelling and fighting all kinds of injustices," he said.

Some 25 Christian Poles who risked their lives during the war to help hide and protect Jews -- a group recognised by Israel's Yad Vashem Holocaust museum as "Righteous Among the Nations" -- also told Francis their stories.

Among them was Maria Augustyn, whose family hid a Jewish couple behind a wardrobe for years, and Anna Bando, who helped rescue an orphan from the Warsaw ghetto and gave several Jews forged "Aryan" papers.

A Hebrew prayer for the dead was also read aloud in Polish by Stanislaw Ruszala, Catholic parish priest of the town of Markowa, where a family was wiped out after they were discovered to be sheltering Jews.

Jozef and Wiktoria Ulma and their seven children were butchered. Wiktoria, who was seven months pregnant at the time, had started giving birth before she was executed, according to the Vatican.

More than 100,000 non-Jewish Poles, Roma, Soviet prisoners of war, homosexuals and anti-Nazi partisans also died at the Auschwitz-Birkenau camp in occupied Poland. The Soviet Red Army liberated it in 1945.

Two of the pope's predecessors also visited the camp: John Paul II -- a former archbishop of Krakow -- in 1979 and Benedict XVI in 2006.

(This story has not been edited by NDTV staff and is auto-generated from a syndicated feed.)
Comments
Pope Auschwitz visitPope Francis