The ministries of lector and acolyte existed before but were officially reserved to men. 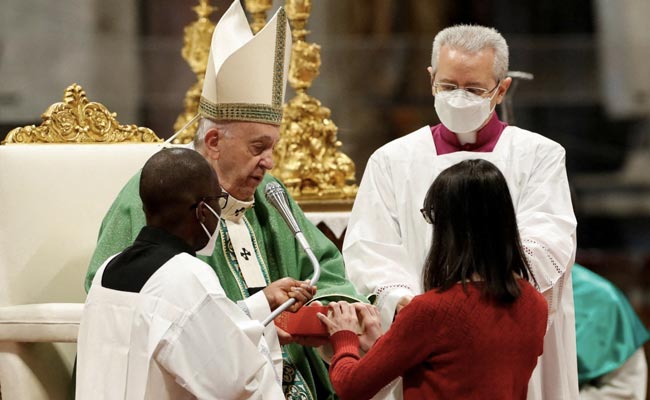 At the Mass, Pope Francis installed six women and two men as lectors.

Pope Francis on Sunday for the first time conferred the lay Roman Catholic ministries of lector and catechist on women, roles that previously many had carried out without institutional recognition.

He conferred the ministries at a Mass in St. Peter's Basilica, where, in an apparent reference to resistance to change by some conservative, he criticised those who need to have rigid regulations and "more rules" in order to find God.

Last year, Francis changed Church law on the ministries of lector and acolyte, which mainly had been reserved to seminarians preparing for priesthood, saying he wanted to bring stability and public recognition to women already serving in the roles.

Lectors read from scripture, acolytes serve at Mass, and catechists teach the faith to children and adult converts.

The ministries of lector and acolyte existed before but were officially reserved to men. Francis instituted the ministry of the catechist last year.

At Sunday's Mass the pope installed six women and two men as lectors and three women and five men as catechists. Francis gave a bible to each lector and a crucifix to each catechist.

The formalisation, including a conferral ceremony, will make it more difficult for conservative bishops to block women in their dioceses from taking on those roles.

The change will be particularly important as a recognition for women in places such as the Amazon, where some are the de facto religious leaders of remote communities hit by a severe shortage of priests.

The Vatican stressed that the roles are not a precursor to women one day being allowed to become priests. The Catholic Church teaches that only men can be priests because Jesus chose only men as his apostles.

Supporters of a female priesthood say Jesus was conforming to the customs of his times and that women played a greater role in the early Church than is commonly recognised.

Francis has appointed a number of women to senior jobs in Vatican departments previously held by men.