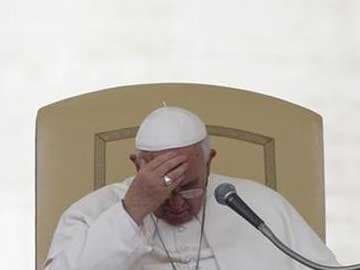 File photo: Pope Francis touches his forehead as he leads the general audience in Saint Peter's square at the Vatican

Vatican City: Pope Francis on Friday personally asked forgiveness for thousands of child sex abuses carried out by priests and promised more action following accusations of cover-ups and excessive leniency by the Vatican.

"I feel compelled... to personally ask for forgiveness for the damage they have done for having sexually abused children," the pope said at a meeting with members of a children's charity, Vatican Radio reported.

The apology was a first for Francis since he was elected last year and he was quoted as saying there were "quite a few" guilty priests, although "obviously not compared to the number of all the priests".

"The Church is aware of this damage," he said.

"It is personal, moral damage carried out by men of the Church and we will not take one step backward with regards to how we will deal with this problem and the sanctions that must be imposed.

"On the contrary, we must be even stronger," he added.

Francis was meeting with members of International Catholic Child Bureau (BICE), which works to protect the rights and dignity of children worldwide.

Thousands of cases of abuse by priests have come to light over the past decade and the Catholic Church is regularly accused of trying to cover up the crimes.

Figures on the total number of priests found guilty by religious authorities are hard to come by and activists criticise delays and opacity in the inquiries.

The Vatican says it is investigating thousands of cases and in January revealed that some 400 priests were defrocked for sex crimes in a two-year period between 2011 and 2012 by Francis's predecessor, Benedict XVI.

The Vatican has vowed a zero-tolerance approach and has begun implementing prevention and detection measures to root out abuse including through a commission recently set up by Francis that includes an Irish victim.

But the approach to tackling abuse varies widely between Catholic bishops' conferences in different countries and there is concern that there are still many unreported cases in Africa and Asia.

The Catholic Church in Italy came under fire last month for approving a set of guidelines that said there was no legal obligation but only a "moral duty" for bishops to inform the police about suspected abuses.

The US-based Survivors Network of Those Abused by Priests (SNAP) said this reflected the "stunning, depressing and irresponsible contradiction between what Vatican officials say about abuse and do about abuse".

The United Nations in February also condemned the Vatican for failing to stamp out abuse and allowing systematic cover-ups, calling on the Church to remove clergy suspected of raping and molesting children.

The UN report said the abuse had affected "tens of thousands" of children worldwide and said the Vatican should automatically refer cases to law enforcement.

Benedict XVI made the first Vatican apology on abuse in a letter to Irish victims in 2010 in which he said: "You have suffered grievously and I am truly sorry."

"I know that nothing can undo the wrong you have endured. Your trust has been betrayed and your dignity violated," he said.

Promoted
Listen to the latest songs, only on JioSaavn.com
"We are all scandalised by the sins and failures of some of the Church's members."