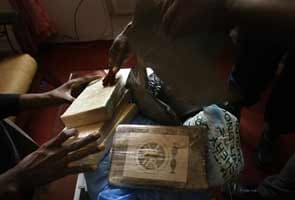 Police Col. Cesar Augusto Morelli tells reporters the tunnel connected the ringleader's home to a cocaine lab and then to a point close to a wall separating the Sao Remo slum from the campus of the University of Sao Paulo.

He says traffickers would emerge from the tunnel, walk a few yards (meters) and exchange drugs for money through a hole in the wall.

He says police discovered the tunnel while looking for suspects in the September killing of a fellow officer.