"The ruling will be published today in the Journal of Laws," the government information centre said on Twitter. 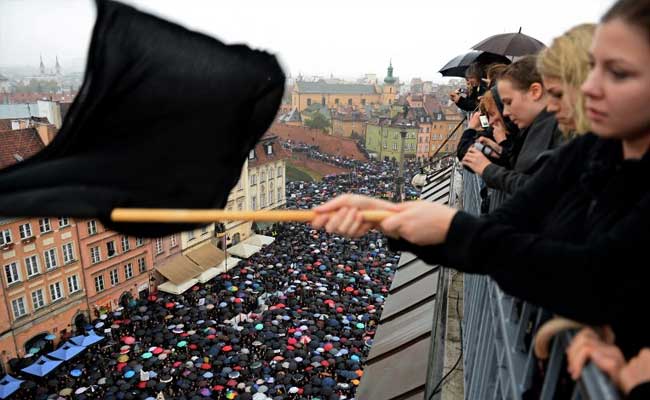 A controversial Polish court ruling that imposes a near-total ban on abortion will come into force on Wednesday, the government said, in an announcement expected to spark major protests.

"The ruling will be published today in the Journal of Laws," the government information centre said on Twitter.

Poland was rocked by massive demonstrations when the Constitutional Court ruling was first issued in October.

The ruling said abortions in cases of foetal abnormalities were "incompatible" with the constitution.

It means that all abortions in Poland will now be banned except in cases of rape and incest and when the mother's life or health are considered to be at risk.

The ruling is in line with the policies of the governing right-wing Law and Justice party (PiS).

The government said the reasoning behind the October 22 ruling would also be published.

Women's Strike, the organisation behind the demonstrations, called for a protest later on Wednesday outside the Constitutional Court in Warsaw.

"We are calling on everyone to go into the streets," she said.

Klementyna Suchanow, another organiser from Women's Strike, said: "The whole of Poland is mobilising, not just in Warsaw. We are ready!

Predominantly Catholic Poland already has one of Europe's most restrictive laws on abortion.

There are fewer than 2,000 legal abortions every year and women's groups estimate that an additional 200,000 women abort either illegally or abroad.

The government had delayed publishing the ruling after nationwide demonstrations held in defiance of coronavirus restrictions banning rallies.

The protests sparked by the abortion ruling soon became an expression of wider anti-government sentiment.

The biggest protests brought together tens of thousands of people in what organisers said was a generational "revolution" against the status quo, including against Poland's Catholic hierarchy.

The government has defended the verdict, saying it will halt "eugenic abortions", but human rights groups have said it would force women to carry non-viable pregnancies.