A proud Navy mother accidentally turned her son into a viral Twitter meme while he was taking a college exam. 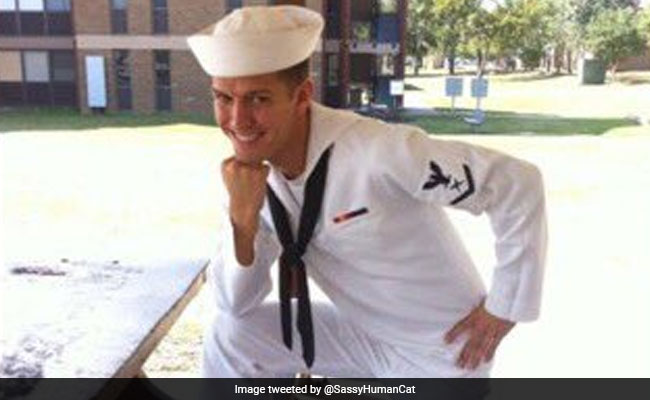 Pieter Hanson was in the middle of a marketing exam when his phone started blowing up, buzzing and buzzing until he was convinced something terrible had happened. Too anxious to focus, he whizzed through the rest of his test, handed it in to his University of Central Florida professor and bolted into the hallway to pull out his cellphone and find out what was going on.

Sure enough, something terrible had happened indeed: His mom accidentally turned him into a viral Twitter meme.

"This is MY son," began his mom's viral post, which featured a photograph of Hanson posing in his Navy uniform. "He graduated #1 in boot camp. He was awarded the USO award. He was #1 in A school. He is a gentleman who respects women. He won't go on solo dates due to the current climate of false sexual accusations by radical feminists with an axe to grind. I VOTE. #HimToo."

"Hey, Pieter, we want you to know that this is going on," one friend texted him.

"We know this isn't you," said another.

It was all rather disorienting. The tweet, since deleted, had been widely shared, immediately casting Hanson as the poster boy for the #HimToo movement. The movement has more recently been seen by some as the antithesis of the #MeToo movement, suggesting in the wake of the Brett Kavanaugh Supreme Court confirmation hearings that men are frequently victims of false sexual-assault accusations and that many accusers are liars.

The problem: Hanson, a 32-year-old Navy veteran, doesn't support this movement, considering himself an ally of the #MeToo movement, he told The Washington Post. Nor is he fearful of "solo dates."

"It doesn't represent me at all," said Hanson, who is studying entrepreneurship with plans to open his own brewery. "I love my mom to death, but boy . . . I'm still trying to wrap my head around all this."

Hanson and his brother, Jon, said they could only speculate why their mother would write the post, saying she had a tendency to write gushing social media posts about her sons and sometimes could make "loose cannon" statements, but not like this. (They spoke to The Post on the condition that their mother not be identified, seeking to protect her privacy). Hanson said he was too heated to speak with her directly about it Monday evening, instead asking his grandmother and younger brother to communicate his wishes that she remove the tweet. She removed her full account.

Within hours of the tweet's going viral, Hanson said, his life "became a whirlwind." "#HimToo" started trending as hundreds started mocking his mom's message, creating their own "This is MY son" posts. The parodies featured everyone from Guy Fieri in his flamin' hot button-down to SpongeBob SquarePants to Donald Trump Jr. holding a hunting rifle.

This is MY son. He graduated #1 in boating school. He was awarded 374 consecutive employee of the month awards. HE WAS NUMBER ONE. He is a gentleman who respects women. He won't go on solo dates because of the current climate of stolen Krabby Patty formulas. I VOTE #HimToopic.twitter.com/yBUb3BSBLG

This is MY son. He graduated #1 from the University of Flavortown. He was awarded three banging fajita poppers. He was #1 in flamin' hot crunch. He won't go on solo dates due to the current climate of false accusations of taking the last slice of pizza. I VOTE. #HimToopic.twitter.com/4DY151a2W7

This is My son. He graduated #1 in his class at Nazareth High. He is a gentleman who loves women and respects virgins like his mother. He is afraid to go on solo dates with women because he is afraid they will lie and say he made them wash his feet.
That, plus he's gay.#HimToopic.twitter.com/sMR88fggAQ

This is my son. He's a large adult holding an enormous gun. Sometimes he kills elephants for fun. Is he even divorced yet? He thinks he's the future of the Republican Party. He once dmed with Julian Assange. #HimToopic.twitter.com/7Lt3EyDyI4

This is MY son. He graduated second to last in flying camp. He successfully swallowed salmon today. He is a gentleman who respects - nay, deserves women. He wont go on solo dates due to the current climate of false sexual accusations, and also bc hes emotionally stunted #HimToopic.twitter.com/TDLweUjpHJ

"No one teaches you how to talk someone through this situation," said Hanson's best friend, Sarah Nich, a beer brewer in the Orlando area who invited Hanson over for a couple of beers to cool down. "It's bizarre, and the Internet's weird. And it was so unfortunate because it's the opposite of who Pieter is as a person."

Hanson said the #HimToo politics in his mother's post surprised him, given that he and his brother had considered her progressive while growing up. Most recently, the hashtag emerged among conservatives as a way to counter the #IBelieveDrFord campaign among feminists and progressives during the Kavanaugh hearings.

As Wired magazine reported in a story tracing the evolution of the hashtag #HimToo, the hashtag wasn't always used this way. #HimToo originally began as a way for men to voice their experiences as victims of sexual assault or harassment alongside the #MeToo movement. It next morphed into a way to shame men who had been accused of sexual assault, as in #HimToo, Wired reported.

And finally, in the wake of allegations from Christine Blasey Ford that Kavanaugh sexually assaulted her when they were teenagers, #HimToo became a hashtag to bolster men claiming to be victims of false sexual assault allegations.

"Anybody can say literally anything about any man," tweeted @hucksworld on Sept. 23, "and it will be automatically believed if the accuser is a woman. No presumption of innocence. No burden of proof on the accuser. Complete upending of the same legal system we all expect to protect our rights."

Such false reports are rare, occurring in approximately 2 to 10 percent of cases, according to a study in the journal Violence Against Women. Nevertheless, President Donald Trump emboldened the cause after saying he believed it was a "very scary time for young men in America" because of the allegations waged against Kavanaugh, which Trump believed were false.

Early Tuesday morning, Hanson got on Twitter for the first time to create an account and to clarify that he does not support this strain of the #HimToo movement. He said he wanted to "turn a negative into a positive," voicing support for #MeToo and later encouraging his newfound 3,000 Twitter followers to donate to causes that have specifically affected his family, such as the Leukemia & Lymphoma Society.

That was my Mom. Sometimes the people we love do things that hurt us without realizing it. Let’s turn this around. I respect and #BelieveWomen . I never have and never will support #HimToo . I’m a proud Navy vet, Cat Dad and Ally. Also, Twitter, your meme game is on point. pic.twitter.com/yZFkEjyB6L

"Sometimes the people we love do things that hurt us without realizing it," he wrote. "Let's turn this around. I respect and #BelieveWomen. I never have and never will support #HimToo. I'm a proud Navy vet, Cat Dad and Ally. Also, Twitter, your meme game is on point."

Pieter Hanson#HimTooThis is MY son