Voting 38-2, the House of Representatives justice committee said there was "probable cause" to impeach Maria Lourdes Sereno, in a move critics allege is part of wider efforts by Duterte to destroy foes and usher in one-man rule. 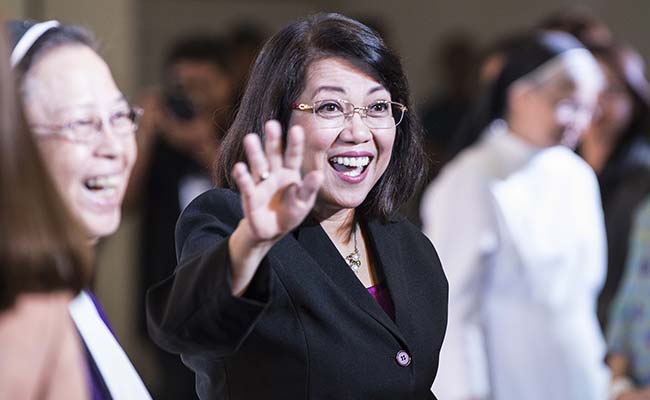 Voting 38-2, the House of Representatives justice committee said there was "probable cause" to impeach Maria Lourdes Sereno, in a move critics allege is part of wider efforts by Duterte to destroy foes and usher in one-man rule.

A US-style impeachment trial in the Senate will follow if the House adopts the committee report, focusing on allegations Sereno failed to pay about two million pesos ($40,000) in taxes.

"All kinds of lies, threats, harassment and bullying have been thrown my way but I will not yield," Sereno, the country's first female chief justice, said at an International Women's Day event in Manila.

"I am fighting for our future as a freedom-loving nation," the 52-year-old said, framing the case against her as an issue of "judicial independence".

Aside from the impeachment case, the government's chief lawyer on Monday asked the Supreme Court itself to oust its chief justice, citing her alleged failure to disclose assets.

Justice committee chairman Reynaldo Umali said his panel will ask the lower house, dominated by Duterte allies, next week to send the case to the Senate for trial.

Duterte and Sereno first crossed swords in 2016 when the newly elected president demanded that judges he linked to the illegal drug trade hand themselves in to authorities as part of his crackdown on narcotics.

The chief justice rebuffed him, citing rule of law and separation of powers between the executive and judicial branches of government.

Police have since killed more than 4,100 drug suspects, with rights groups alleging more than 8,000 others have been murdered in what they describe as crimes against humanity.

Other Duterte critics have also been ousted, punished or threatened including detained Senator Leila de Lima, the Commission on Human Rights, and an anti-corruption prosecutor who had investigated allegations of Duterte's hidden wealth.

Promoted
Listen to the latest songs, only on JioSaavn.com
"I am concerned by deepening repression and increasing threats to individuals and groups with independent or dissenting views," he said.

(This story has not been edited by NDTV staff and is auto-generated from a syndicated feed.)
Comments
Rodrigo DutertePhillippineMaria Lourdes Sereno