The area where the plane crashed is home to numerous resorts that are packed with visitors during the hottest months. 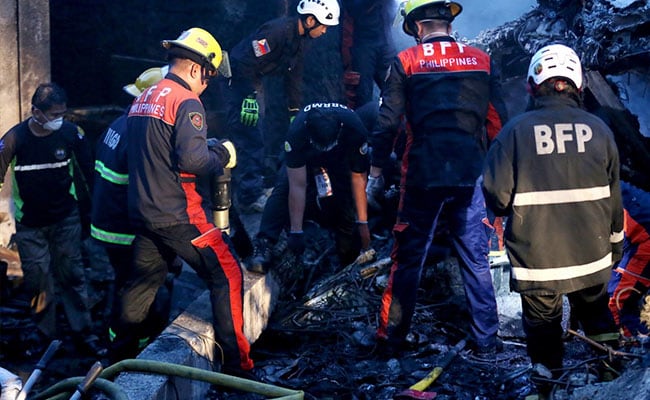 Nine people were killed when an air-ambulance plane crashed at a resort area near the Philippine capital on Sunday, sparking a fierce blaze and sending terrified locals fleeing, authorities said.

Dramatic video on social media showed emergency vehicles rushing toward a building engulfed in roaring flames in Calamba City as authorities urged crowds to move away for their own safety.

After dousing the blaze, rescuers found nine bodies in the smoking ruins -- believed to be those aboard the King Air 350 light aircraft.

"No one will survive this crash. We assume that all confirmed passengers of this plane are dead," local emergency official Jeffrey Rodriguez told AFP.

Police said two people on the ground were injured in the crash and rushed to hospital, but have not reported any fatalities from those who were in the resort area when the plane went down.

Philippine aviation authorities said the plane was carrying a patient and medical team from the nation's south to Manila when it disappeared from radar about 25 nautical miles (46 kilometres) from the capital.

The area where the plane crashed is home to numerous resorts that are packed with visitors during the hottest months.

Deadly light aircraft crashes are not unusual in the Philippines, where small planes are used to hop between the archipelago's numerous islands.

Ten people were killed in March 2018 when a plane went down after take off in Plaridel town, which is near Manila, and killed those on the aircraft and four more on the ground.

(Except for the headline, this story has not been edited by NDTV staff and is published from a syndicated feed.)
Comments
PhilippinesManila